The better to bless you with, my dear! 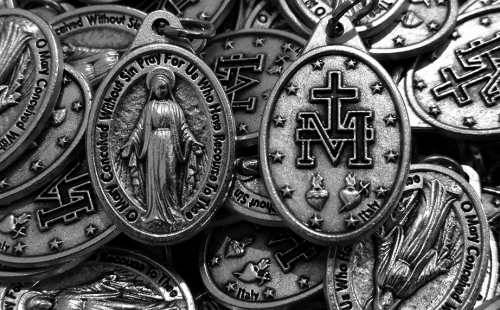 The great joy that comes from keeping holy things handy

50) Keep holy cards, short prayers or blessed medals handy and give them out to people you meet as you are inspired as a blessing to others.

Years ago, in the midst of the very beginnings of my reversion to the faith, I was sweeping the floor when a strong sense came over me — an absolute certainty that Mary wanted me to have a Miraculous Medal.

Understand, I’d never given a thought to the Miraculous Medal before, and knew little about it, but the push was so strong that I called my husband and asked him if he would pick one up for me at the local Catholic bookstore, on his way home from work, which he kindly did without even questioning my news that the Mother of God wished me to have it.

Once I had the medal, I began to read up on how the visionary St. Catherine Laboure was instructed by Mary to have the image struck, and the prayer that surrounded the image, “O Mary, conceived without sin, pray for us who have recourse to thee,” became a prayer that I still utter every day, often in the same way that I will pray the Jesus Prayer. I think of it as “the Mary Prayer.”

Read more: The Jesus Prayer: Mercy with every breath

I wore the medal for many years — and successfully prayed many Miraculous Medal novenas thanks to the constant reminder of its weight upon my breast — until one moment at church, when I felt a shove to part with it that was as strong and certain as had been the call to wear it. I’d stopped into church midday, to pray an Office of Readings, when a man sat before me — in the whole huge and empty church, he plopped down right in front of me — and began to weep, loudly and with gasps that sounded like they were rising from the very depths of his soul. I felt compelled to remove the medal from my neck and slip it into his hand. He looked at the medal, then to me, and then to the crucifix above us, with an expression of wonder, and choked out a “Thank you.” I patted his shoulder and said, “I’ll pray for you,” and then disappeared, because I was feeling shy about intruding. More mature in my faith, now, I think today I would have talked to him, and discovered what his story was — perhaps it was a great, miraculous one that would have explained his stunned expression toward the crucifix. Or perhaps it was never my story to know at all.

I left the church feeling quite certain that I had been meant to give away my medal, but I did find myself missing it, often. That’s when it occurred to me that it might be a good idea to keep handy a store of Holy Things, blessed and carried with the whole intention of being given away.

I started with a little packet of Miraculous Medals — very inexpensive — and eventually moved on to carrying a bag of Jubilee Medals of St. Benedict, which a Benedictine monk kindly blessed for me. Those very quickly got handed around to younger people I met, particularly the teenaged and college friends of my own children, who were not praying — and were not being prayed for reliably by anyone in their mostly-agnostic families — and who would often posture as sophisticates “too cool” for church, but not too stupid to ignore the reality of evil. “Just keep it on you,” I would tell them. Recently, I have learned that many of them still keep the medal, either in their pockets or their wallets. It’s a small thing, but knowing it, now I can ask St. Benedict to pray for them, and bring them closer to Christ, with a bit more force. “He keeps your medal,” I remind him.

For a while, I carried a pack of Holy Cards with me that had been blessed during a papal audience with Pope Benedict XVI, but when I was down to my last few cards, I got a little clingy, and have saved them for “special” cases.

Currently, the Holy Card I carry with me is also my business card. On the front is the usual stuff — name, email address and phone number. On the back is an image of the great and dear Philip Neri — one of the patrons of our English edition. I tease people, telling them, “See, now even if you don’t like me, you can’t throw away my card, because it’s also a Holy Card!” People seem to love it, and I love making Neri better known to them.

But it occurs to me that, given the contact information on the other side, perhaps I am ready to make myself more available to people than I was, back when I gave a man a Miraculous Medal, and then slipped away from him before he could bring me the intimacy of his story.