The crux of Amoris Laetitia: For Francis, it’s all about confession 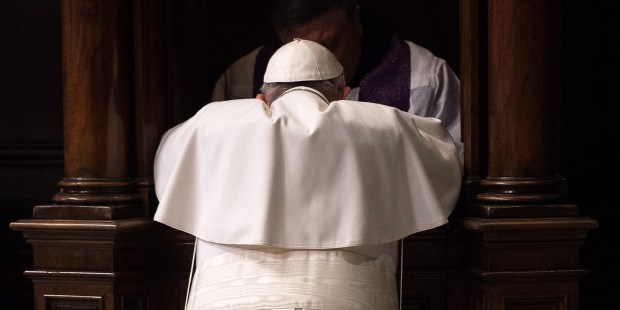 Divorce, remarriage and the pope, in his own words

Amoris Laetitia is making my life difficult right about now. But I think three stories from his interview book The Name of God Is Mercy help explain what Pope Francis up to.

But then they ask me about that infamous portion of Amoris Laetitia addressing divorce and remarriage and communion, and I have no good answer for them. Neither do the theologians I know who most appreciate Pope Francis. You can argue about the prudence of the four cardinals’ recent dubia asking questions about it, but it is increasingly hard to argue the logic of it.

I am a layman, so I will leave these answers to those appointed by the Church to give them. But I can say one thing: I do not consider Pope Francis the radical change agent — or lightweight squish — that some make him out to be.

I can also say that I think he explains where he is coming from in his book. First, consider the personal experience of confession that he refers to on pages 11-12.

Pope Francis’s book is all about his personal conviction about the power of sacramental confession. He returns to it again and again: The confessional is the place we meet Jesus, the healer.

It all goes back to an experience he had when he was 17. It was September 21, 1954. He can never forget that date. That is when he entered a confessional and received “spiritual consolation without spiritual cause. Literally a bolt out of the spiritual blue,” as Father Robert Spitzer describes it. The teen “has a profound mystical experience of Jesus. He is literally completely transfixed by this experience. When he is experiencing this, he feels the mercy of God. He feels Jesus literally healing him.”

The future pope was convinced that day that Jesus was calling him, and he was convinced that he would follow — anywhere. When he later read a homily about the saint for that day, St. Matthew, his motto for life was set: Miserando atque eligendo; Shown mercy and called.

When he announced the Year of Mercy in 2015, he gave this reason: “Let us place the Sacrament of Reconciliation at the center once more in such a way that it will enable people to touch the grandeur of God’s mercy with their own hands,” he wrote (No. 17).

And thus it is that in his 2016 interview book The Name of God Is Mercy, Francis comes back again and again to the confessional. Sacramental confession is at the heart of his message. “Without it the world would not exist,” he says.

Now take another story from that book: the story of his niece.

Later he tells the story of his niece who married a man who had previously been married, and kept custody of his children. “This man was so religious that every Sunday, when he went to Mass, he went to the confessional and said to the priest, ‘I know you can’t absolve me but I have sinned by doing this and that, please give me a blessing.’”

He couldn’t receive absolution because of the words of Jesus Christ in Luke 16:18: “Everyone who divorces his wife and marries another commits adultery, and the one who marries a woman divorced from her husband commits adultery.”

Catholics tend to call the issue about Amoris Laetitia that disturbs them “communion for those divorced and remarried without an annulment.” I am sure Pope Francis sees communion as the most important issue here, too, but I think his response to the situation might have even more to do with the prior step a communicant must take: confession.

Imagine confessing but being denied absolution. The thought bothers Pope Francis. A lot. It should bother us too.

Where would someone go in a situation like that? Many take up the cross of living a married but celibate life. For others that option is either impossible or unbearable. Many of these leave the Catholic Church altogether and find a spiritual home that defines marriage more loosely.

But pretending marriage isn’t marriage and pretending that sin isn’t sin was not an acceptable answer for his niece’s husband and it isn’t acceptable for Pope Francis, either. On pages 15-16 of The Name of God Is Mercy, Pope Francis warns about relativism.

“Humanity is wounded, deeply wounded,” he says and it is “not just a question of social ills.”

“Relativism wounds people too: All things seem equal, all things appear the same. … Pius XII, more than half a century ago, said the tragedy of our age was that it had lost its sense of sin, the awareness of sin. Today we add further to the tragedy by considering our illness, our sins, to be incurable.”

Pope Francis is no relativist. He has been decrying relativism all along. He knows marriage is indissoluble. He doesn’t like divorce. But he also refuses to play a game in which we pretend that there are not real problems with many marriages.

He made this clear when he streamlined the annulment process. “Those who think this is equivalent with ‘Catholic divorce’ are mistaken,” he told reporters. “Marriage is indissoluble when it is a sacrament. And this the Church cannot change. It is doctrine. It is an indissoluble sacrament.”

Rather, he said, new annulment procedures are meant to determine whether “what seemed to be a sacrament wasn’t a sacrament, for lack of freedom, for example, or for lack of maturity, or for mental illness, or there are so many reasons … that there was no sacrament.”

He gave examples when an annulment might be in order, recalling how, in Buenos Aires, he often saw women getting married because they were pregnant. “We called them ‘speedy weddings.’ They were to keep up appearances. Then babies are born; and some work out, but there’s no freedom. Others go wrong little by little; they separate and say: ‘I was forced to get married because we had to cover up this situation.’”

He summed up: “‘Catholic divorce’ does not exist. Nullity is granted if the union never existed, but if it did, it is indissoluble.”

So where does all of this leave us?

It leaves us with a Pope who doesn’t want to run roughshod over doctrine, but is intent on fulfilling his “Shown mercy and sent” mission to get as many people in the confessional as possible. Father Raymond J. De Souza thinks the Holy Spirit is doing the job of slowing Pope Francis down.

It is clear that Pope Francis won’t slow down on his own. A story on pages 12-13 of his book makes clear his intention to err on the side of mercy.

“I will never forget that,” said Pope Francis.