The best way to tell your kids the truth about Santa 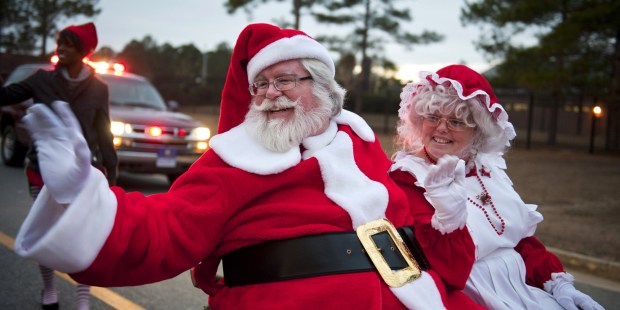 For parents of young children, this time of year sometimes poses the problem of Santa. Should kids be disabused of the myth as soon as possible, or should they be allowed to revel in their imagination of reindeer on the roof? At what point in a child’s life, and in what manner, should myths give way to reality?

Or, is there a way to transform one into the other, with an important lesson thrown into the mix?

A post that’s been shared a few times on Facebook caught our eye. It might be worth a try. We found it on the wall of one Charity Hutchinson, although apparently it originated with a mother by the name of Leslie Rush.

It’s sort of a 21st-century version of “Yes, Virginia, there is a Santa Claus.”

“In our family, we have a special way of transitioning the kids from receiving from Santa, to becoming a Santa,” Rush wrote. “This way, the Santa construct is not a lie that gets discovered, but an unfolding series of good deeds and Christmas spirit.”

The author suggests taking the child out for brunch some time when they are 6 or 7, or “whenever you see that dawning suspicion that Santa may not be a material being…. We get a booth, order our drinks, and the following pronouncement is made:”

You sure have grown an awful lot this year. Not only are you taller, but I can see that your heart has grown, too.

The parent is to “point out 2-3 examples of empathetic behavior, consideration of people’s feelings, good deeds etc, the kid has done in the past year.” And continue:

In fact, your heart has grown so much that I think you are ready to become a Santa Claus.

You probably have noticed that most of the Santas you see are people dressed up like him. Some of your friends might have even told you that there is no Santa. A lot of children think that, because they aren’t ready to be a Santa yet, but you are.

Tell me the best things about Santa. What does Santa get for all of his trouble?

Parents are advised here to “lead the kid from ‘cookies’ to the good feeling of having done something for someone else.”

Well, now you are ready to do your first job as a Santa.

“We then have the child choose someone they know—a neighbor, usually,” the author continues. “The child’s mission is to secretly, deviously, find out something that the person needs, and then provide it, wrap it, deliver it—and never reveal to the target where it came from. Being a Santa isn’t about getting credit, you see. It’s unselfish giving.”

As an example of how it’s done, Rush writes about a neighbor known as the “witch lady,” so nicknamed because of her meanness to kids who play too loud or accidentally fling a frisbee in her yard. Rush’s oldest child noticed that she came out every morning to get her paper in bare feet, “so he decided she needed slippers.” He sleuthed to figure out her foot size before buying some warm slippers.

He wrapped them up, and tagged it “merry Christmas from Santa.” After dinner one evening, he slipped down to her house, and slid the package under her driveway gate. The next morning, we watched her waddle out to get the paper, pick up the present, and go inside. My son was all excited, and couldn’t wait to see what would happen next. The next morning, as we drove off, there she was, out getting her paper–wearing the slippers. He was ecstatic. I had to remind him that no one could ever know what he did, or he wouldn’t be a Santa.

Rush’s son continued his secret mission for several years, but when her second son came of age, her first son had the honor of instructing him. Rush is gratified to see how well they both take to uncredited gift-giving, and the fact that they “never felt that they had been lied to—because they were let in on the Secret of Being a Santa.”

So, parents, what do you think? Would you try this yourself? Let us know what happens. Or tell us about another approach that’s worked for you and your family.

Read more…“WATCH: A Texas pastor shows how not to evangelize—by visiting a mall and telling kids Santa doesn’t exist”

[Editor’s Note: Take the Poll – Do your kids still believe in Santa?]