If we have no peace it is because we have forgotten we belong to each other.– St. Teresa of Calcutta

Since their founding, the Franciscan Friars of the Renewal have been known for music thanks to the songs and videos of Fr. Stan Fortuna. More recently, the friars combined their musical talents with their basketball skills to raise money for Mary’s Meals, followed by a series of music videos from the very talented Brother Isaiah, including a Mother-Teresa inspired song just in time for her canonization.

Their latest release was a carefully selected and timely choice: In the words of Br. Mark-Mary, the friars hope the video will “speak a word into the culture of division, protests, violence, and hate in the culture.”

And what is that word? Thatwe belong to one another. That amidst the current political climate, amidst the racial tensions, amidst the deep-seated issues dividing our country, there is a fundamental truth that cannot be forgotten: those on “the other side” are our brothers and sisters.

“When I look into the face of my enemy, I see my brother,” rings out the refrain.

“The lyrics remind us that true peace will come when we recognize that we are brothers to one another because we share a common Father, not because we agree on everything,” shared Br. Mark-Mary, calling to mind the words of Pope Francis:

Modernity sought to build a universal brotherhood based on equality, yet we gradually came to realize that this brotherhood, lacking a reference to a common Father as its ultimate foundation, cannot endure. We need to return to the true basis of brotherhood (Lumen Fidei, 54).

Beyond the lyrics, the music video is a powerful visual representation of the message: the recording brought together a cast of talented artists, of different races and ages, lay and religious, male and female…the one human family.

Peeling back another layer, the song was intended to send a message of Christian unity. The friars very intentionally chose to do a cover of “Brother” by protestant group The Brilliance. The two go hand in hand – working for reconciliation and working for Christian unity. In the words of John Paul II:

How indeed can we proclaim the Gospel of reconciliation without at the same time being committed to working for reconciliation between Christians? … When non-believers meet missionaries who do not agree among themselves, even though they all appeal to Christ, will they be in a position to receive the true message? Will they not think that the Gospel is a cause of division, despite the fact that it is presented as the fundamental law of love? (Ut Unum Sint, 98) 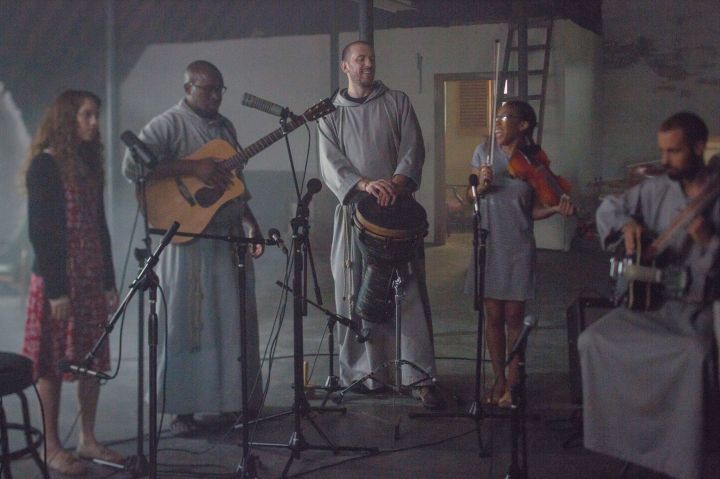