In the womb, two babies debate matters of facts and faith 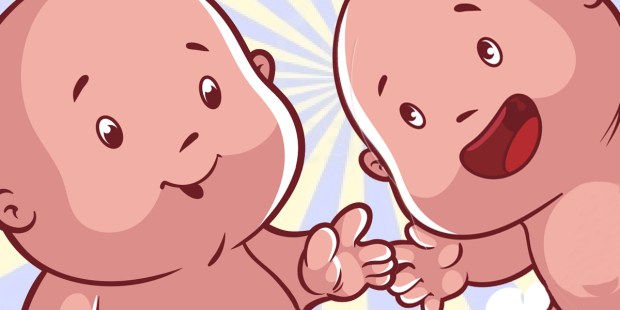 “Nonsense,” said the first. “There is no life after delivery…”

In a mother’s womb were two babies. The first baby asked the other: “Do you believe in life after delivery?”

The second baby replied, “Why, of course. There has to be something after delivery. Maybe we are here to prepare ourselves for what we will be later.”

“Nonsense,” said the first. “There is no life after delivery. What would that life be?”

“I don’t know, but there will be more light than here. Maybe we will walk with our legs and eat from our mouths.”

The second baby held his ground. “I think there is something and maybe it’s different than it is here.”

The first baby replied, “No one has ever come back from there. Delivery is the end of life, and in the after-delivery it is nothing but darkness and anxiety and it takes us nowhere.”

“Well, I don’t know,” said the twin, “but certainly we will see mother and she will take care of us.”

“Mother?” The first baby guffawed. “You believe in mother? Where is she now?”

The second baby calmly and patiently tried to explain. “She is all around us. It is in her that we live. Without her there would not be this world.”

“Ha. I don’t see her, so it’s only logical that she doesn’t exist.”

To which the other replied, “Sometimes when you’re in silence you can hear her, you can perceive her. I believe there is a reality after delivery and we are here to prepare ourselves for that reality when it comes….”

[As we researched the provenance of this unique little story, which has been circulating for years throughout the internet, our French team claimed it as “an old French story.” Other sources credit Henri J. W. Nouwen for the tale, and Laurie Seymour of Baca Journey claims that the story, in all of its variations, has been “adapted from the writings of Pablo Molinero.” We present it here, in good faith, without a clear idea of its origins. – Ed]