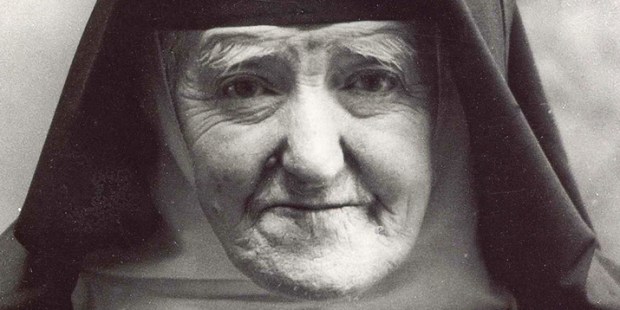 Following Therese’s “little way” was not “all roses” for Leonie

On Saturday, January 21, 2017, Bishop Jean-Claude Boulanger, Bishop of the Diocese of Bayeux-Lisieux, celebrated a Mass to commemorate the transfer of Servant of God Léonie Martin’s body from the crypt of the Visitation monastery to a new side-chapel in the church. This move, part of the canonization process for Léonie, will better facilitate pilgrims who come to the monastery to pray for her intercession.

In an interview with Ouest-France, Father Antonio Sangalli, postulator for the cause of Léonie Martin, expressed his belief that the initial investigation into her life will conclude in the next few months.

“We expect that the historical commission will finish its work and that the two theologians chosen by the diocese will make their report… This report will then be sent to the Vatican and Léonie Martin will be declared ‘venerable.'”

Who was Léonie Martin?

Before Saint Thérèse of Lisieux wrote her Story of a Soul autobiography that has captivated millions around the world, Thérèse had a “first disciple” of her famous “little way”: her own sister, Léonie.

However, following Thérèse’s “little way” was not “all roses” for Léonie. From the very beginning of her life Léonie had to overcome numerous obstacles and was seen as a “troubled child” even by her mother.

Léonie was born the middle child, and while her other sisters were healthy and beautiful, Léonie was difficult, unattractive and sickly. At an early age she had a severe case of eczema that covered her whole body, which did not clear up until after her second birthday.

As she grew, Léonie’s health improved but her constant tantrums and poor intellectual capability worried her mother. Zelie wrote about her, saying, “The poor child worries me; she has a very undisciplined nature, and mentally she is underdeveloped.” Some believe that Léonie may have had a form of autism.

She was expelled from school on multiple occasions for being unruly and disruptive. It took Zelie’s sister (who was a Visitation sister) great effort to discover how to teach the young child.

“As you know, the poor child has plenty of faults… [At first,] I scolded her whenever she didn’t do well… I was making her unhappy… I wanted to be God’s Providence to her so I stopped scolding her and started to be very gentle with her, telling her that I saw she wanted to be good … and that I had faith in her. This had a magical effect – not just temporary, but lasting; now I find her a lovely, obedient child.”

However, this did not last and she continued to struggle in school and her continued outbursts forced Zelie to return her home. Once at home, Léonie’s struggles continued when it was discovered that a maidservant had been verbally and physically abusing her. The maid was dismissed and Léonie started to improve once again.

After her mother’s death, Léonie was sent to another boarding school and improved in her studies. Then her sisters began to enter religious life and Léonie too had a desire to devote her life to God. This too would have its many obstacles and Léonie entered multiple communities before finding her place at the Visitation monastery at Caen.

Throughout all of her struggles with religious life and the ailing health of their father, Thérèse wrote to Léonie and counseled her, teaching her the “little way.” Léonie admired her sister so much that she took her sister’s name when she finally took vows, becoming Sister Françoise-Thérèse.

While she is not as well known as her sister, Léonie’s story is inspiring and her perseverance throughout so many struggles is an example for all of us.

After Leonie has been declared “venerable,” the diocese plans to submit three unexplained healings to the Vatican for further review in hopes that they will become the miracles that propel Léonie to her beatification and canonization.