5 Saintly marriage tips from Blessed Charles of Austria and his bride, Zita 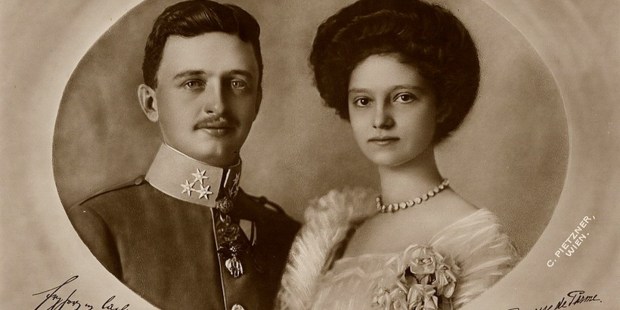 Traditionally the Church celebrates the life of a saint every year on the date of his or her death, a day that marks their entrance into heaven. However, this is not the case with Blessed Charles of Austria.

Instead, the Church chose a date from his life that had great significance and paved the way for his sainthood: his wedding anniversary, October 21.

Blessed Charles, besides being the last Emperor of Austria (and ruler of the Austro-Hungarian Empire) and a leader who worked tirelessly for peace during World War I, was a family man and a loyal husband to his wife, Zita. They were married for 11 years before his early death in 1922, and raised 8 children.

Being the head of an empire at war certainly has its many difficulties, but in the midst of it all Charles never forgot the importance of his marriage. In fact, his marriage to Zita provided his children and subjects a model to strive after and imitate.

Here are five marriage tips based on the life of Blessed Charles of Austria and Servant of God Zita that can inspire us and help married couples live up to their vows “until death do us part.”

1) Remember the primary goal of marriage is to get your spouse to heaven.

The day before their royal wedding, Charles said to Zita, “Now let’s help each other get into heaven.” It is easy to forget that marriage, above all things, is a sacrament. This means that God grants married couples special graces to fulfill their state in life, aimed at the ultimate destination of heaven. God desires our happiness and we can achieve that happiness by recognizing the role we have in helping our spouse lead a holy life. This is certainly not easy, but with God all things are possible.

2) Entrust your marriage to God and to the Blessed Mother.

Charles and Zita knew that if they wanted to “help each other get to heaven,” they needed all the help they could get. Besides getting married in a Catholic ceremony, the couple had a special engraving on the inside of their wedding rings. The inscription read in Latin “Sub tuum praesidium confugimus, sancta Dei Genitrix” (“We fly to Thy protection, O Holy Mother of God”). It is an ancient prayer that expressed their desire to place their marriage under the watchful care of the Blessed Virgin Mary.

Additionally, before going on a honeymoon the royal couple made a pilgrimage to the Marian shrine of Mariazell, dedicated to Our Lady Magna Mater Austriae (Great Mother of Austria). Marriage can often be very difficult and so couples should not be afraid to ask God and his Mother for help.

Often there is the temptation in marriage to live separate lives where the husband has “his job” and the wife has “her job.” Decisions are made separately and spouses don’t “meddle” in each other’s affairs. Charles and Zita, on the contrary, viewed themselves more of a team. Zita was very interested in the occupation of her husband and was not afraid to give her thoughts. She would often travel with Charles when on political trips in addition to taking an active role in the social concerns of the empire.

Besides working together as a royal couple, Charles and Zita actively taught their children the truths of the faith. It was not simply “Zita’s job” to teach the children how to pray, but Charles also instilled in his children a love of God and personally taught them their prayers. They took seriously the biblical ideal of “becoming one flesh” in all things.

4) Continually fan the flame of love.

Being an emperor during World War I meant Charles had to travel and make vital military decisions. This pained Charles as he had to be away from his wife and family. Charles decided to install a telephone line from his military headquarters to the imperial palace for the purpose of calling Zita multiple times a day. He would call the palace simply to talk with Zita as well as see how the children were doing. Charles understood that even with his many responsibilities, his marriage and family needed top priority. He knew that a marriage would fail if it was not nurtured with opportunities to keep the flame of love alive.

5) Love each other with an everlasting love that endures through any trial.

Newly married couples are often surprised at how quickly the initial excitement of love wears off and find themselves not “feeling” the same love they had for their spouse. This lack of a “feeling” can discourage a couple, especially when in the midst of a trial. Charles and Zita, however, did not stop loving each other even when difficulties arose. After facing the humiliation of being exiled from their own country, Charles and Zita clung to each other stronger than ever. Soon after they faced an even bigger test of their love when Charles contracted pneumonia and was quickly on his death bed.

Charles’ last words to his wife were, “I love you endlessly.” Zita, for the next 67 years, wore black clothes to signify her mourning. She never stopped loving him until her own death, when she was reunited with him in heaven. Their love was more than a “feeling,” but a choice to love each other “until death do us part” and beyond.