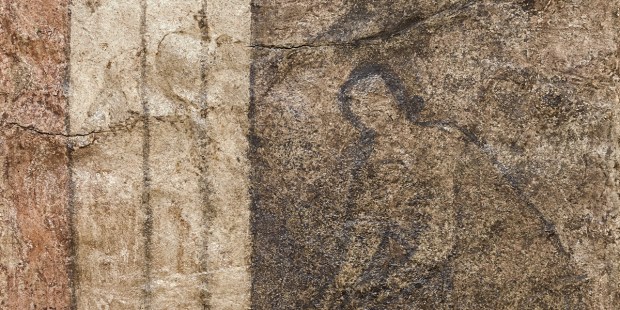 The Dura-Europos excavation site in Syria is still threatened by war, but the wall painting is safe in a museum at Yale.

Dura-Europos is one of many archaeological sites that are threatened by the ongoing conflicts in Syria. But for Christians, any loss at this site on the Euphrates River in Eastern Syria, whether because of military action, terrorist destruction or greedy looting, would be particularly harsh.

That’s  because, since a team from Yale University excavated here in the 1920s, a house they found has been recognized as the oldest existing Christian church in the world. It is now thought that an image found in that church is the earliest surviving depiction of the Virgin Mary.

The image—of a woman leaning over a well—is actually safe and sound in a museum at Yale. It has always been considered a depiction of the Samaritan woman who speaks with Jesus beside Jacob’s well (John 4:1–42).

Leith reviews scholar Michael Peppard’s argument that the portrait depicts not the Samaritan woman but the Virgin Mary at the moment of the Annunciation, when the angel Gabriel announces to her that she will bear the Son of God:

As Peppard explains, the third-century Dura Annunciation is based not on the Biblical Annunciation in Luke 1:26–38 but on the Gospel of James (a.k.a. the Protevangelium of James), a second-century apocryphal (i.e., not considered authoritative) gospel that narrates the life of Mary up to and including the birth of Jesus. According to the Gospel of James, Mary “took the pitcher and went forth to fill it with water and lo! a voice saying, ‘Hail thou that art highly favored, the Lord is with thee, blessed art thou among women.’ And she looked around on the right and on the left to see from where this voice could have come.”

If Peppard’s interpretation is correct, this would make the portrait at the Dura-Europos church the earliest image of the Virgin Mary.

The wall painting was taken from the small baptistery of the 3rd-century house church. Christians had met for liturgical celebrations there before Constantine allowed Christianity to be practiced openly, said a 2014 article at Vatican Insider:

The church in Dura-Europos kept its function as a private house on the top floor; but on the ground floor, around 230 A.D., a small room containing no more than 60 people became a Christian place of worship. The frescoes on the walls prove this; there are the first known representations of the Good Shepherd, the healing of the paralytic and Jesus walking on the waters with Peter. It is worth remembering that the very idea of a church separate from private houses could exist only after the 313 A.D. edict, through which the Emperor Constantine recognized Christians’ freedom of religion.

Dura-Europos is now known as Deir ez-Zor. “Since 2011, no archaeologist has been able to set foot in Dura-Europos,” the article said. “The area is now dominated by the self-proclaimed Caliphate. Fear for the archaeological site has been high for a long time, but only now are the satellite pictures confirming these fears. The images show the appearance of holes in the ground that suggest digging by looters in Dura-Europos. The [United Nations] researchers report that some are close to the ancient Christian place of worship.”

Peppard, the scholar who theorizes that the image is of Mary, not the Samaritan woman, wrote in America magazine last year that the Islamic State has “certainly been to Dura-Europos in the past two years. The only reason they did not destroy the church is because they could not: its walls were removed by the Yale excavation team decades ago. Several of the panels remain safely on display in the Yale University Art Gallery,” including the woman at the well, whoever she may be.

This website gives more detail on what can be viewed in that gallery.

Oddly, the image shows the woman with the pitcher by herself. But is she really? As Peppard wrote in the New York Times last year, a fresh look at the archaeologists’ work has suggested another presence within the icon:

The woman at Dura-Europos has yet more secrets to reveal. Archival photographs and drawings made by the archaeologists on site show that the supposed absence behind the female figure is not totally silent — it speaks a couple of lines. That is to say, a field sketch of the wall done “to show additional details” depicts two painted lines touching the woman’s back, along with a kind of starburst on the front of her torso, features described as “unexplained” in the archaeological report. But with the new interpretation of the figure, in connection with the Eastern iconography that came later, the lines invite a rather evident meaning. They appear to represent a motion toward the woman’s body and a spark of activity within it, as if something invisible were approaching and entering her — an incarnation.

Some may object that the Catacombs in Rome present earlier Marian images, Peppard concedes. “But these are challenging to date with certainty, and many scholars argue that the proposed examples have insufficiently specific iconographic signifiers.”

“The Christians at Dura-Europos still have secrets to reveal about early Christianity in the East,” Peppard wrote in America. But, because of looting amidst the chaos, “chances to access their particular form of Christian identity are slipping away.”