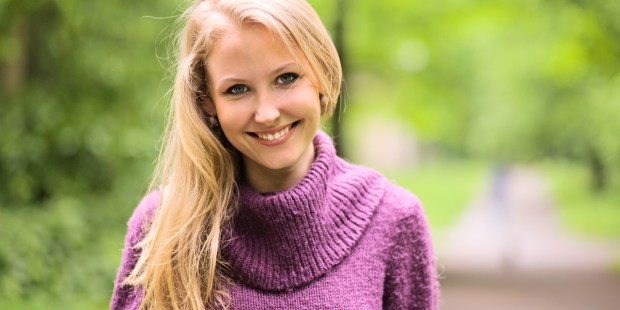 This versatile color can convey all sorts of meaning, such as peace, mystery, and devotion.

Many Catholics associate the color purple with spring time (Lent and Easter specifically). That’s because it’s thought to be the color of the robe that was put on Christ during his Passion — purple was a color associated with royalty — to mock him for his title “King of the Jews.” But purple isn’t only meaningful during Holy Week. Experts in the psychology of color say that it can also send powerful messages when you use it in your everyday wardrobe.

Here’s the very first thing you need to know about purple: It’s considered a very attractive color. Maybe the most alluring in the entire rainbow. Many think this is because the color itself is a result of the unusual combination of a warm, feminine color (energetic red) with a cooler, more masculine color (relaxing blue). And it occurs rarely in nature (lavender, grapes, orchids, and lilies are among the few examples), which makes it a special sight for our eyes. So if you wear purple, experts say you shouldn’t be afraid of attracting a little extra attention, standing out, and looking “different.”

Lavender, or amethyst, which is lighter and more subtle, has a calming and even nostalgic effect on viewers. It’s a shade that is best used in a spring weekend outfit, or in certain accents of soothing home decoration, such as aromatic candles.

By contrast, violet is associated with power, and often, consequently, with wealth and violence (some people even suggest that this is related to the phonetic similarity of the words “violet” and “violence”). However, this has a deeper historical background. In ancient times, purple was the most difficult and expensive color to produce; for this reason, it was only worn by royalty and, later, by people in high positions of authority, including those in the Church.

It was in this way that purple also became associated with the spiritual and sacred. As a liturgical color, it symbolizes penitence and humility. The latter, above all, to distinguish the power of the church leaders from the power of sovereigns, who obtain and maintain their power in different ways.

It is no surprise, then, that highly successful celebrities — and also politicians — incorporate the color purple into their wardrobe at important events. Such was the case of Hillary Clinton, who chose to wear a suit with purple accents for her first speech after losing the U.S. presidential election. On one hand, it symbolized unity and harmony (the combination of Republican red with Democrat blue); on the other, for Methodists just as much as Catholics, this color is associated with mourning.

Since violet is the last visible color of the spectrum before ultraviolet, it is on the borderline between visible and invisible. And so it is often also associated with magic and fantasy. Just think about the many comics and cartoons for children that cloak their more fantastical figures in purple, such as Merlin the Magician, or the princess in Tangled.

As you can see, purple has many meanings, depending on the shade, and how or when it is worn. But if you take a minute to think about how you use it in your daily life, it’s a color that can really enhance your day: Maybe by giving you a sense of empowerment when you don your favorite purple sweater, or when using a purple pen to take notes at work. Or maybe you’ll decide to paint one of your bathroom walls a calming lavender shade to help you relax in the tub after a long day. The purple possibilities are endlessly enjoyable.

This article was originally published in the Spanish edition of Aleteia.