The bones of St. Nicholas still exude a mysterious oil, with a mixed reputation 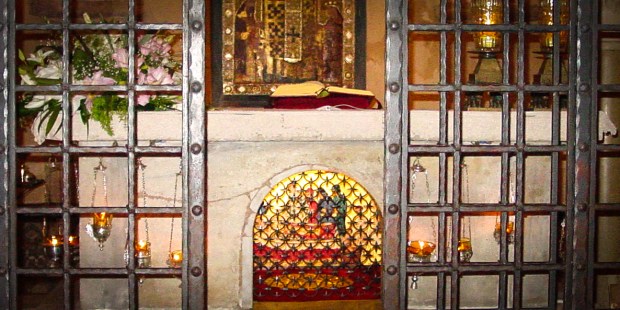 Lent and Easter Sunday are past, but in some parts of the world, they’re already thinking about Advent and Christmas.

In Bari, on Italy’s southeast coast, the annual collection of an oil that oozes from the relics of St. Nicholas is set to begin on May 9. St. Nicholas, of course, is the prototype of Santa Claus, and his feast day is just weeks before Christmas.

Although his bones were long ago brought back to Myra, in southern Turkey, pilgrims still flock to Bari to venerate St. Nicholas and to collect the oil, known as St. Nicholas Manna.

The oil is believed to have healing powers, but there have been times in history when it was misused—for nefarious purposes.

In the years after the death of St. Nicholas of Myra in 346, his tomb in Myra was said to give off a sweet smell and to weep a liquid that would cure those who touched it. The conquest of Turkey by the Seljuq Turks in 1071 inspired devotees to transport his bones to Christian territory. In 1087, a group of sailors stole the relics and brought them to Bari. Later, the relics were re-interred in a basilica built to honor the saint. According to Atlas Obscura, the new marble tomb also began to excrete the sweet smelling liquid. It became known as the Manna of Saint Nicholas.

This manna—described by early reports as an oil, but revealed more recently to be water—was widely believed to be a cure-all. For hundreds of years now, the manna has been collected, mixed with holy water and bottled in small glass vials decorated with icons of the saint for sale to pilgrims.

The bones and the manna production remained an undisturbed miracle until 1953, when restoration work at the basilica required the moving of the relics. A study was allowed and led by Luigi Martino, professor of human anatomy at the University of Bari. When the tomb was opened, the incomplete skeleton was found to be resting in a shallow pool of liquid. Studies revealed it to be that of a slight man in his 70s, matching the traditional story of St. Nicholas’ death at age 74. The relics were left on a linen sheet, which was seen to collect moisture even as the study continued. At the end of the construction in 1957, the bones were reinterred, where they have continued to weep manna.

Atlas Obscura says that there are many theories about the cause of the manna, including capillary action of the stone tomb sucking up ground or seawater and redistributing it at the tomb.

But the miraculous oil became so well known, as bottles of manna were taken to all corners of the Christian world, that it served as a cover for a very different kind of liquid, intended not to heal but to kill. In the 17th century, a Sicilian woman named Teofania de Adamo developed a poison that she sold on the black market, mostly to women who wanted an easy way out of disastrous marriages. De Adamo eluded authorities by secreting the poison in small bottles bearing the image of St. Nicholas. Known as Aqua Tofano (the word is based on this woman’s given name), it is thought to have been a mixture of arsenic, lead and belladonna.

“Vials of this stealthy poison were sold to the ladies of Rome and Naples for the purposes of dispatching inconvenient husbands,” Atlas Obscura notes. “Before she was hanged for her crimes—accused of helping kill some 600 people—she allegedly passed on the deadly secret to her daughter, who went on distributing the poison, disguised in innocent looking delicate glass jars decorated with images of Saint Nicholas of Bari.”

In fact, the substance also came to be known as “Manna di San Nicola,” according to Wikipedia.