Teachers are getting antsy over Fidget Spinners 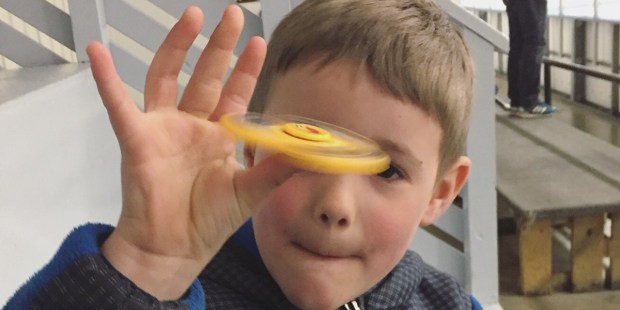 The popular children’s toy is being banned from classrooms.

The latest toy craze for children of all ages has come in the form of Fidget Spinners. These little spinning hunks of metal and plastic can be found from toy stores to convenience stores and seem to entrance kids.

They are meant to give a student’s tactile sense something to focus on while allowing their mind to concentrate more on school work, but it would appear that Fidget Spinners may have become more trouble than they’re worth. While “fidget therapy” has shown good results in students on the autistic spectrum and in those with ADHD, the general population of students spends more time playing with them than focusing, which has led some schools to ban them outright.

Chicago Tribune has the full story:

“Frankly, we’ve found the fidgets were having the opposite effect of what they advertise,” said Kate Ellison, principal of Washington Elementary School in Evanston. “Kids are trading them or spinning them instead of writing.”

It took only a few days after teachers started noticing the toys before almost all of the older students had multiple devices, she said.

“All of the sudden, they’re everywhere,” she said. “It happened overnight.”

While some cost upward of $20, cheaper versions can be had for just a few bucks.

The staff recently made the decision to ban fidgets, and Ellison sent out a letter to parents, explaining the tools are a distraction or worse, because they’ve caused conflict among students.

“They’re treating them like they would treat a toy,” she said. “So we can’t have them in class or at recess.”

While Ellison acknowledged the benefits of fidgets and the philosophy behind them, she said the school has other tools for students who need so-called “manipulators,” like a squeeze ball, or a piece of Velcro or rubber band underneath their desk.