16 Beautiful images of Mary in art 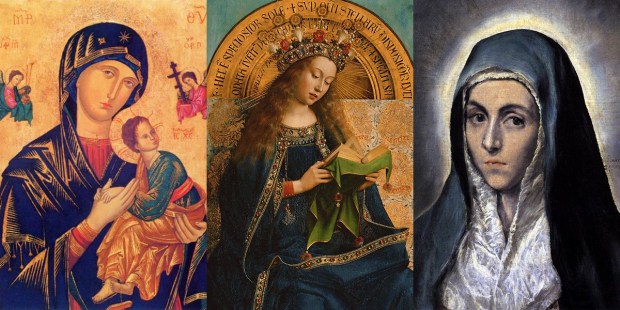 A beautiful array of timeless images — both classical and modern — to honor the Virgin Mary, the spiritual mother to us all.

May is traditionally the month of Mary. Around the world, Christians acclaim and remember the Blessed Virgin by praying rosaries, decorating statues with flowers, and participating in May Crowning ceremonies. For Her wanted to honor Mary by presenting a beautiful array of timeless images — both classical and modern — that remind us how Mary is a spiritual mother to us all.

Icons are windows to heaven, and a reminder that those who have died are still with us. This beautiful icon, painted in the 7th century, is one of the oldest known images of Mary. Since very few icons from this period have survived, it’s a treasure.

Mary—painted here by Fra Angelico, a 15th-century monk—is often portrayed holding a Bible since Jesus is called “The Word.” In a way, by studying the Scriptures, Mary knew and loved her son before he was even conceived.

Our Lady of Guadalupe

This historically significant and famous image of Mary never ceases to amaze viewers, especially when they gaze up at the original in Mexico City. When it miraculously appeared on the cloak of a peasant named Juan Diego in 1531, the image became a sign for ages to come of Mary’s love for humanity.

The Scriptures say that Mary pondered the words and actions of Jesus in her heart. Whether she understood or not, Mary always prayerfully and calmly considered how God was at work in her life and in the world.

One of many historical images of Mary breastfeeding Jesus, this one depicts the beauty of the human body and the closeness of a mother and child in the most basic of human interactions.

This beautiful depiction of an African Madonna with vibrant colors and a stylized manner is reminiscent of an icon in its formality, but still conveys the tender protectiveness of a mother for her child.

Head of the Virgin, by Leonardo da Vinci

This image, a practice chalk drawing for a later painting, shows how masterful Leonardo was at his craft. The Virgin’s profile is serene and has been described as possessing “magical beauty.” It’s hard not to notice the love in her eyes.

Painted by South African artist Hennie Niemann Jnr, the creativity and use of color in this painting reveals Mary as we’ve never seen her before. Serene and beautiful, she appears ageless.

Francia painted the Virgin here with such delicacy that supposedly the people of Venice, “when they beheld the new and living beauty, ran madly to see it, thinking it would never be possible to improve upon it.”

Virgin Mary, by Jan Van Eyck (from the Ghent Altarpiece, 1432)

This image is a panel in a larger collection of paintings created to sit on a church altar. During World War II, the painting was stolen and later recovered by the Monuments Men. Van Eyck, the artist, worked with a then-new type of paint made of oils and used them to obtain a saturation of color that is unparalleled.

Coronation of the Virgin, by El Greco

El Greco’s typical luminosity shines through in this coronation scene. Down below, the disciples are gathered and gaze upwards in wonder at a heavenly scene—the Virgin Mary being crowned Queen of Heaven by all three persons of the Trinity.

Theotokos means “God-bearer,” a title given to Mary, who bore the son of God. Artist Ann Marie Campbell made her own egg tempera paint using yolks and powdered pigments from around the world and adding 23 karat shell gold and Swarovski crystals to this beautiful icon, which she says is among her personal favorites.

In this intimate portrait by the 16th-century Spanish artist known as “El Divino,” the baby Jesus tugs at the veil of his mother and clutches at her breast. The painting reminds us of Mary’s maternity. Like any baby, Jesus was totally dependent on his mother for his life and sustenance.

Madonna of the Magnificent, by Sandro Botticelli (ca. 1445)

The title of Botticelli’s painting alludes to the Magnificat, a prayer of thanks that Mary offered to God. The Blessed Mother is depicted here being crowned with shining stars, an allusion to one of her traditional titles, “Stella,” which means “Star.”

El Greco paints Mary here in a way that allows her soul to shine out from the image. The coloring is subtle but luminous, and although Mary seems apprehensive, she is also radiant.

Our Lady of Perpetual Help, Byzantine Icon (believed to be from the 13th or 14th Century)

The legend behind this Byzantine icon is that it’s a copy of a lost original painted by St. Luke himself. Tradition has it that this scene depicts the moment Jesus awoke from a bad dream and Mary comforted him. For centuries, Christians have turned to Our Lady of Perpetual Help to ask for Mary’s intercession.