When Donald meets Francis: What’s in store for first meeting of Trump and Pope? 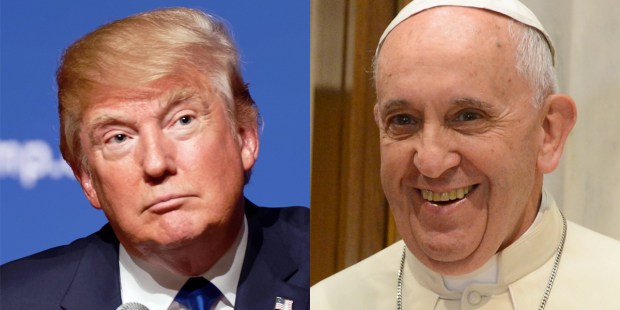 Leaders may find common ground on religious freedom, but will one see the other’s view on hot-button issues?

Religious freedom may be high on the agenda when President Donald J. Trump pays his first visit to Pope Francis at the Vatican next week. It is, after all, one area where the two world leaders can find some common ground.

Neither the U.S. government nor the Vatican has said much about what will be discussed at the May 24 encounter between the pontiff and the new American president, but the White House issued a statement May 4 saying the meeting is to “discuss cooperation between the United States and religious communities in areas of joint concern.”

“Trump will no doubt want some help with the Middle East, since that’s the most neuralgic spot in the world at the moment,” commented Robert Royal, president of the Faith and Reason Institute and editor in chief of The Catholic Thing. “He’s been edging towards ‘safe zones’ there, an idea long spoken of for Syria, etc., that would help stem refugee flows and provide some sort of life for people without the need to flee their own lands and cultures. If so, I expect Francis will still push accepting more refugees and immigrants. That will not go very far, I fear.”

Related to the highly anticipated meeting are reports that Trump will name Callista Gingrich, the wife of former House Speaker Newt Gingrich, as U.S. ambassador to the Holy See. Newt Gingrich confirmed that his wife is “under consideration,” CNN said. The news network confirmed that Callista Gingrich was undergoing a government financial review and added that the White House hopes to announce her nomination before Trump meets with Francis.

In addition, Aleteia has learned, Sam Brownback, the Republican governor of Kansas, may be under consideration for the position of Ambassador-at-Large for International Religious Freedom, an appointment that many Catholics might find appealing. Brownback, a convert to Catholicism, worked on religious liberty issues, particularly in relation to the civil war in Sudan, when he was a U.S. senator from Kansas.

Responding to a question about both potential appointments, a State Department official would only say: “We continue to have a deep bench of experienced career professionals serving in key positions that are highly capable and able to help the Secretary lead the Department and advance U.S. interests worldwide.”

A spokeswoman in the Kansas governor’s office, Melika Willoughby, would not confirm or deny the rumor about Brownback but would only say that he is “focused on his continued efforts to make Kansas the best state in America to raise a family and grow a business.”

The White House did not respond to a request for comment.

Aside from religious liberty, President Trump and Pope Francis may also discuss issues such as immigration and climate change. They are widely believed to be at odds over many of those issues, When the pontiff was returning to Rome from a February 2016 visit to Mexico, he commented that anyone who thinks about building walls without building bridges is not Christian. It was an apparent reference to then-candidate Trump’s promise to build a border wall between the United States and Mexico.

On his flight to Portugal last week, however, Francis said he would withhold his judgment of the president until he meets him in person.

“I never make a judgment of a person without listening to them,” the pope said. “Always there are doors that are not closed. Look for the doors that are at least a little bit open, enter and talk about common things and go on. Step by step. Peace is handcrafted. It is made every day. Also friendship among people, mutual knowledge, esteem, is handcrafted. It’s made every day. Respect the other, say that which one thinks, but with respect, but walk together … someone thinks of one way or the other, but say that …. Be very sincere with what everyone thinks, no?”

In spite of many apparent differences between the two men, Paul Kengor, author of A Pope and a President: John Paul II, Ronald Reagan, and the Extraordinary Untold Story of the 20th Century, said he doesn’t “expect either man to seek out a verbal sparring match.”

“Francis is, frankly, too kind and too winsome to provoke a contentious disagreement,” Kengor said. Rather, he sees the encounter primarily as a get-to-know meeting. “Francis should be pleased and heartened that President Trump—for his first trip abroad—chose to go to the Vatican,” Kengor said. “That’s a significant gesture by Trump and his staff.”

Trump’s stop in the Eternal City, a day before Ascension Thursday, will take place after he visits Saudi Arabia and Israel on his first international journey as president. In recent history, only President Richard M. Nixon met with a pope on his first foreign trip as president. Nixon had an audience with Pope Paul VI at the Vatican in March 1969.

After the Vatican, Trump will attend the NATO summit in Brussels May 25, followed by a gathering of the world’s major economic powers, known as the Group of Seven, meeting in Sicily May 27.

Whether or not the visit to the leader of the world’s 1.2 billion Catholics will do much to engender good will, longtime Church affairs commentator Russell Shaw has doubts that the meeting will have much substantive significance.

“The pope will speak in non-specific terms about welcoming strangers, the president will speak about the importance of religious liberty, with his recent executive order in mind,” said Shaw, author of American Church. “Mainly, they will be sizing each other up. Depending on what each concludes about the other, they might do some real business in the future—but by the same token, they might not. We shall see.”

Added Robert Royal: “I hope Francis talks to Trump about mercy and forgiveness. To me, Trump understands these even less than he does domestic and international affairs.”