Why do Catholics use crucifixes? 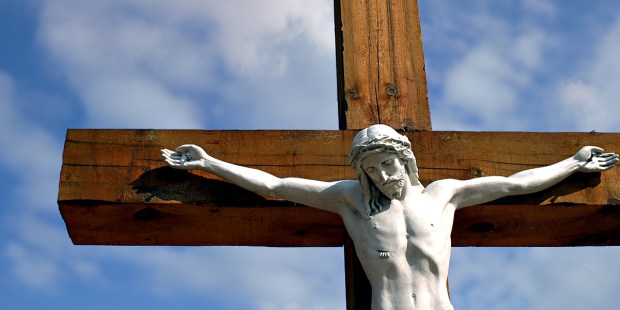 The crucifix in Christian usage has a long and ancient history, dating back to the 5th century.

While Catholics hold much in common with various Christian denominations, one of the many differences that remain is the use of crucifixes. Catholics are well known for their use of crucifixes inside churches and homes, while Protestants are often hesitant and typically use a cross without a corpus.

Why is that? Why do Catholics prefer crucifixes?

Since the very beginning of Christianity the cross was seen as a sign of victory over sin and death. It was through Jesus’ sacrifice on Mount Calvary that the gates of Heaven were opened and the power of sin vanquished. The Romans saw it as a sign of death and betrayal, but the early Christians saw it as a reminder of God’s great love for them.

By the 2nd century Christians began using a simple cross in worship as well as in their homes. To avoid detection from the authorities Christians would often disguise the cross by using the crux decussate, which resembled the Roman symbol for the numeral 10. It is now known as the St. Andrew’s Cross and is in the form of an X. Early Christians also used the Greek letter tau (T) to represent Jesus’ sacrifice. Additionally, during this period of Christianity many truths of the faith were veiled and represented by allegorical symbols instead of direct representation of historical events. This allowed Christians to remain undetected as well as instruct pagans in the faith without using images that were considered shameful at the time.

It was not until after Christianity was able to operate openly that crosses with the figure of Christ’s body began to appear in Christian art. The crucifixion scene became quite common in Christian art by the 5th and 6th centuries, though early depictions were slightly different than what we are accustomed to today.

According to the Catholic Encyclopedia, Jesus is seen “alive and shows no sign of physical suffering; He is clad in a long, flowing, sleeveless tunic (colobium), which reaches the knees. The head is erect, and surrounded by a nimbus, and bears a royal crown. The figure is fastened to the wood with four nails…In a word, it is not Christ suffering, but Christ triumphing and glorious on the Cross.”

By the “13th century complete realism is reached by the substitution of one nail in the feet, instead of two, as in the old tradition, and the resulting crossing of the legs. All this was done from artistic motives, to bring about a more moving and devotional pose. The living and triumphant Christ gives place to a Christ dead, in all the humiliation of His Passion, the agony of His death being even accentuated.”

Since then Catholics have preferred to use the cross with the body of Christ on it, though Catholics still use a plain cross in religious art and jewelry. In the liturgy the Church specifically requires the use of a crucifix on or near the altar.

“…either on the altar or near it, there is to be a cross, with the figure of Christ crucified upon it, a cross clearly visible to the assembled people. It is desirable that such a cross should remain near the altar even outside of liturgical celebrations, so as to call to mind for the faithful the saving Passion of the Lord” (GIRM 308).

That last sentence summarizes perfectly the primary reason why Catholics use crucifixes: “so as to call to mind for the faithful the saving Passion of the Lord.” While it is true that Jesus rose from the dead and ascended into Heaven, he did so only after dying on the cross. To put it succinctly, there is no resurrection without a crucifixion.

A crucifix further highlights the immense love that Jesus has for us and reminds us of the immense suffering that he endured for our sake. It also teaches us that we too have to “pick up our crosses” and follow Jesus, offering up our many sacrifices to God each day. The life of a Christian is never without struggle and the crucifix reminds us that Jesus suffered first. His sacrifice remains an inspiration for us and shows us the perfection of Christian life. In order to reach Heaven some day, we too will pass through the crucible of suffering.