St. John Neumann: American saint who arrived with $1 in his pocket and one suit of clothes 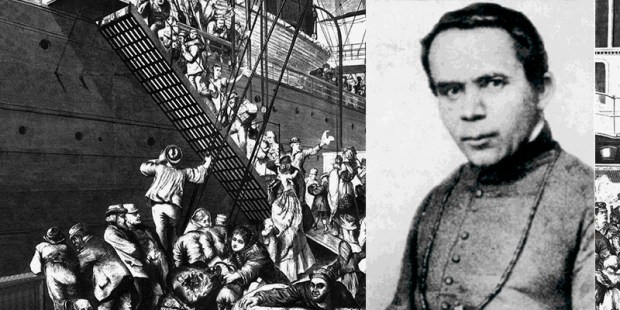 The founder of the first parochial school system in the U.S. was known for his childlike gentleness.

From an early age Saint John Neumann wanted to become a missionary in the New World. He was a quiet boy in his native Bohemia, but had big dreams for his future. Neumann studied vigorously in school and by the time he was 24 was already fluent in six languages.

Religious life had always attracted him and so he entered the local seminary in hopes of becoming a priest. However, by the end of his seminary studies Neumann was denied ordination. There were too many priests in Bohemia! His bishop had trouble placing the abundant number of priests and had to stop ordaining them. As a result, Neumann decided to travel to America in hopes of getting ordained there.

To get there he walked most of the way from Bohemia to France to board a ship to the New World. He arrived in New York in 1836 with one suit of clothes and a dollar in his pocket. Bishop John Dubois badly needed more priests and so promptly ordained him three weeks after his arrival. Neumann was then assigned to mission parishes throughout the area and rode on horseback to travel to his assignments. While his presence was welcomed, his clumsy appearance was made fun of by children. According to Loyola Press, “People laughed at the [way he] rode. Because he was short, his feet did not reach the stirrups.”

After a while working in parishes, Neumann felt the need to be in a community of priests. He asked permission to join the Redemptorist Fathers and was gladly accepted. After six years Neumann was elected the Provincial Superior in the United States. Not long after he was appointed bishop of Philadelphia and suddenly became in charge of a large diocese full of immigrants.

Neumann didn’t sit idle. He began establishing new parishes at the rate of one per month. However, many in the diocese opposed him and disliked him. Additionally, at the time there were many anti-Catholic riots occurring in his diocese that included the burning of churches and convents. His position was difficult and Neumann even requested a transfer, but was denied.

Besides establishing numerous parishes, Neumann created the first unified parochial school system in the United States. This resulted in a burst of growth, boosting enrollment from 500 to 9,000 students.

During his time in Philadelphia, Neumann owned only one pair of boots and was notorious for giving away gifts that were meant for him. He didn’t want to attract attention to himself and desired a simple life.

Neumann was not bishop for very long before dying suddenly of a heart attack at age 48. After his death people started to reflect on his life and recognized his simple holiness. He was beatified in 1963 and canonized a short time after in 1977.

On the 150th anniversary of the founding of the Archdiocese of Philadelphia, Pope Pius XII wrote, “Among the shepherds of the flock in Philadelphia the figure of Venerable John Neumann is pre-eminent. It was mainly through his prodigious efforts that a Catholic school system came into being and that parochial schools began to rise across the land. His holy life, his childlike gentleness, his hard labor and his tremendous foresight is still fresh and green among you. The tree planted and watered by Bishop Neumann now gives you its fruit.”

Saint John Neumann, pray for us!

Read more:
US bishops elect immigrant as their leader