“Here comes everybody”: My grace-filled meet-up with Padre Pio’s relics 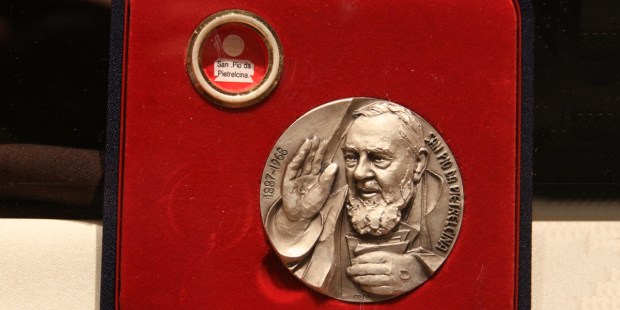 Venerating the relics of St. Pio was a real reminder that we are the Body of Christ.

One day when I was in the 2nd grade, I managed to jam a splinter from the lunch benches under my thumbnail. It went in past the quick, with no easy way to pull it out. Back in the classroom, Sister John Mark, IHM (barely 3 times my age and already betraying signs of her true vocation, mothering many children) took one look, blanched a bit, and stood me up in front of the class.

“I’m going to take this splinter out,” she told the class, “but it’s going to hurt. Everyone put your heads down on your desks, close your eyes, and pray silently.” She sterilized a needle and a pair of tweezers with a bit of rubbing alcohol (amazing what nuns had in those capacious habit pockets, as I remember it) and poked and tugged gently for a good 15 minutes. I cried but not out loud, and by the end all the heads were up and all the kids were staring.

“You faced that like a martyr,” Sister told me. Then she taped the splinter to the back of a holy card. “Take this home and tell your mother it’s a second-class relic,” she said. Thus began my lifelong fascination with relics.

It’s an acquired taste, I know, even among Catholics. When I was part of a pilgrimage visiting Spain a few years ago, I was surprised how few of my fellow travelers shared my enthusiasm for venerating Saint Teresa’s heart muscle and one of her arms, displayed in ornate reliquaries at the convent in Alba de Tormes, where Teresa died. Teresa, like many saints, is widely distributed, and her relics occasionally wrangled over; poor Avila has only a finger bone, kept in the convent gift shop. (Nobody would let me take time to seek it out.)

“It’s revolting,” one of the pilgrims told me. “It’s desecration of a corpse!”

Maybe. But it’s also deeply human and incarnational, this need to hold tight to physical reminders of the holy ones we love. Relics of the martyrs were central to the first Christian churches, embedded in the altar of Eucharistic sacrifice. “This is My Body,” we are His Body – the living and the dead.

Sure, there’s a cynical side. Once people realized that relics drew pilgrims, and pilgrims boost the local economy, a brisk trade in relics grew up. The bodies and body parts of saints, the instruments of Christ’s Passion, the clothing and household objects used by the Holy Family (even, in the case of Loreto, the whole house itself!) have been sought and collected for millennia, for reasons of devotion or superstition (there must be power in these things, and it will transfer to me!) or profit. “Relics” were often manufactured, too, like knockoff designer handbags.

None of this takes away from the truth and grace of the Church’s veneration of relics. If one were to have any doubt of that truth and grace, all that would be needed to dispel it is to do as I did last week, when I joined thousands of Southern Californians in venerating relics of St. Pio of Pietrelcina (Padre Pio).

I must confess I had no particular devotion to, or even knowledge of, Padre Pio before last week. I knew he had been an Italian Capuchin Franciscan friar gifted with the stigmata (the wounds of Christ) and world-renowned for his stern but merciful conversion of sinners, and his ability to read souls and effect physical cures. (I didn’t know, until I read a little book on St. Pio I bought last week, that he was also credited with bilocation – being in more than one place at a time – and mystical fragrance, a marked but indescribable perfume associated with his presence or intercession.) I knew millions of pilgrims visited him in his small Italian friary during his life, and are still visiting – and claiming his miraculous intervention – after his death.

I always thought he looked a little scary, to tell the truth.

But I was drawn to the veneration by my general liking of relics, and curious to see who might be there. Previous relic tours (yes, they’re really called that) featuring St. Therese of Lisieux’s writing desk and pen in one instance and objects associated with the trio of St. Oscar Romero, St. Thomas More, and St. John Fisher in another drew surprisingly small (to my mind) crowds here in Los Angeles. For St. Pio, on the other hand, the host church – St. Andrew’s Parish in Pasadena – was offering veneration almost around the clock for two days, and expecting many thousands of pilgrims.

Their projections were spot on.

I traveled to Pasadena by city bus from my home on the first morning of veneration. I had to walk a few blocks uphill on a 90-degree day to reach the church – a good thing, as pilgrimages should always include physical discomfort as a reminder that you’re not just a sightseer – and from some distance I could see the line snaking around the exterior of the large old church.

It could have been mistaken for the line to get into a hot new club or a TV show taping, were it not for the fact that nearly everyone was wearing a brown scapular and carrying a rosary. I saw all ages from infants to very elderly, with many young families in between. Many of the pilgrims (like a majority of LA Catholics) were Latino, Filipino, and Asian, but the whole communion of saints was represented. Many strollers and wheelchairs. Wise abuelas (grandmothers) arriving with small children and bags of Oreos. Ladies with umbrellas and parasols unfurled against the sun. Business guys in suits. Here comes everybody, as James Joyce would say.

Like Disney employees, parish volunteers let us know that the wait was approximately an hour from where we stood in line. And as at Disneyland, people with disabilities and families with children under age 2 got a “fast pass” to a shorter indoor line. A young man behind me, dressed in his auto mechanic’s uniform, fretted that he might not make it to work on time. “But I can’t skip el Padre,” he said. “I just have to pray the line moves.” (It did.)

As we turned the corner, we stood in the shade of the church’s tall brick tower, a landmark visible across the San Gabriel foothills. An older man ahead of me was eyeing the tower approvingly. “I used to be a master bricklayer,” he told me. “This is very well built.” He said he was with a group that had traveled together from Riverside, about an hour away. “We are the Legion of Mary,” he told me. “Of course we’re here.” It amused me no end to think that here was a literal mason, coming to do homage to the saint who battled Freemasonry with a passion. Of course.

In the cool tiled vestibule of the church, volunteers were selling laminated prayer cards and books about St. Pio. The young man behind was sad that they had sold out of rosaries, because he was in a hurry and had forgotten to bring his. He bought a card.

This is another thing you need to know about relics – that they are communicable. Items touched to relics offered for veneration become themselves relics of the 3rd class, twice removed from the body of the saint. They are sacramentals, powerful assists in one’s own journey to sainthood.

Two lines moved quickly down the main aisle of the nave. St. Andrew’s is a beautiful traditional church, built more than 150 years ago along the lines of the Basilica of St. Paul Outside the Walls in Rome. There are side altars and niches to draw one’s eye and one’s prayers lining the side aisles. The relics of Padre Pio – a lock of his hair displayed in a glass-fronted monstrance; one of the fingerless gloves he wore to cover the stigmata except when saying Mass, framed under glass; and two pieces of linen, a bit of blood-stained towel and a corner of his bedding, held in a twin reliquary – were offered at the opening of the old communion rail. Pilgrims were invited to touch or kiss the glass over the relics, to touch objects like rosaries and prayer cards to the reliquaries, or simply to pray for a moment. Photos were allowed from a distance, but not while venerating.

Read more: How to venerate a relic

After I kissed the relics and touched my rosary and a prayer card for a friend to them, I moved aside to a table where there were envelopes for donations to fund the building of a Way of the Cross at Pietrelcina. The envelopes contained space to write one’s intentions for St. Pio’s intercession. We were assured that these would be presented at Mass at his shrine.

I knelt to pray at the side chapel devoted to Our Lady of Guadalupe, but ended up just watching the pilgrims. Their faces, the joys and cares they carried to the saint, the urgency of their need to see, to touch, to kiss. The way their faces changed after venerating, their smiles alight, their shoulders lifted, hugging the friends they came with or strangers they met in line. I saw a young nun in full habit (the spirit of Sister John Mark?) talking with a woman who had brought her companion animal, a caged African gray parrot, with her to church. I heard Tagalog and Spanish and Korean and Irish brogues.

This is why we do it, this relic thing. To be physically, materially reminded of the one Body alive in Christ we are, the potential for miracles we possess. To recognize one another as family. To go back out into the hot, scary, complicated world and meet it with the gifts of grace.

Even knowing all this, I wasn’t expecting to be as moved as I was. Maybe that’s another miracle of Padre Pio, who read my hesitant soul and invited me in to get to know him better. We have all the time in the world.

For more information about the U.S. tour of St. Pio’s relics, which resumes again this fall, see the St. Pio Foundation website.