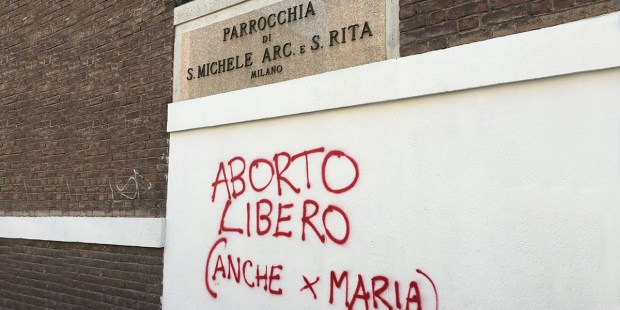 Some days ago, Fr. Andrea, the pastor of Milan’s parish of St. Michael the Archangel and St. Rita, found pro-abortion graffiti scrawled on the wall of his church.

Not only did the vandalism promote abortion, it added some blasphemy: “Abortion on demand (for Mary too).”

Fr. Andrea took to Facebook to respond to the anonymous criminal, encouraging him not only to see abortion for what it is, and to be brave about changing the world for good, but assuring him that the very community he had violated was ready and able to love him.

Here is a translation of the priest’s letter, which has gone viral:

Dear anonymous writer on the wall,

I’m sorry you couldn’t take an example from your mother. She had courage. She conceived you, carried on the pregnancy and gave birth to you. She could have aborted you. But she didn’t. She raised you, fed you, washed you, and dressed you. And now you have a life and freedom. A freedom you’re using to tell us that it would be better if people also like you weren’t in this world.

I’m sorry, but I disagree. And I admire your mother very much because she was brave. And she still is, because, like every mother, she is proud of you even if you behave badly, because she knows that there is still good inside of you that only needs to manage to come out.

Abortion makes nonsense of everything. Death wins against life. Fear defeats a heart that wants to fight and live, not die. It means choosing who has the right to live and who doesn’t, as if it were a simple right. It is an ideology that conquers humanity and wants to take its hope away.

You obviously have no courage. Given that you’re anonymous.

And while we’re at it, I would also like to tell you that our neighborhood has already experienced a lot of problems, and we don’t need people to vandalize the walls and ruin the little beauty we have left.

Do you want to show how brave you are? Then improve the world instead of destroying it. Give love instead of hatred. Help those who are suffering to endure their sorrows. And give life instead of taking it away! This is real bravery!

Luckily our neighborhood, which you are destroying, is full of brave people! Who know how to love you, too — you, who do not know what you are writing.