The fourth largest statue in the U.S. is a Marian image in the Rocky Mountains

What began as the fulfillment of a vow ended up becoming the icon of an entire town.

Just ten miles away from Butte, Montana, and more than 3,500 feet above the surrounding valley, stands the image of Our Lady of the Rockies: a snowy-white statue that stands almost 90-ft (30 meters) tall. The image, which at first was supposed to be only five feet tall, ended up becoming the icon of an entire town. The fourth largest statue in the United States, its story revolves around the hard work of the locals and aseries of unexpected circumstances which allowed the project to fall into place seamlessly.

The story begins with Bob O’Bill, who envisioned the project after his wife was diagnosed with cancer. Matthew Sewell of Churchpop reports that the retired electrician prayed for his wife to be healed, promising to erect a nearly life-sized statue of the Blessed Mother in return, right in his backyard. When his wife made a sudden, miraculous recovery, O’Bill was so thrilled that his plans expanded from a five-foot statue to a towering 90-foot monument to the Virgin Mary.

According to the website, “Our Lady of the Rockies” took six years to complete, requiring 400 lbs. of concrete and a “sky crane” donated by the National Guard. The work was all sourced by residents of Butte, with some donating their summer evenings to clear and pave the mountain road leading to it, while  others worked tirelessly to raise the needed funds.

If the city lacked resources, it overflowed in solidarity. Although the town was in the grips of a crippling economic recession, the people of Butte banded togethe. Even those who had lost their jobs donated their time and experience to work on the road leading up to the site of the statue, and while money was tight, they received just about everything they needed (from the land to equipment) from generous donations and small fundraisers.

Sewell goes on to note a few of the unexpected occurrences that aided them in their mission. In once instance, funds were running low and the crew worried they would run out of fuel, when they found all the gas tanks had been filled. In another, the helicopter used to lift the pieces of the statue into place suddenly lost control and seemed about to falter, a moment recorded in a timeline of the construction, provided by MT Standard:

Dec. 19, 1985 — Wind, or lack thereof, proved to be a problem for the National Guard crew as Our Lady’s hands, with a weight of 19,000 pounds, caused the helicopter to spin uncontrollably as it tried to set it down atop the other four sections already in place. The sky crane turned back and laid the section down near the Mormon Church at 3000 Four Mile Road. Although one of the statue’s fingers was slightly damaged, the crew was successful in its second attempt at 4 p.m.

In a 1985 video of the moment “Our Lady of the Rockies” was completed, featured below, Leroy Lee, who made a series of perfect welds to connect the statues pieces, commented amidst a crowd gazing at their own handiwork through teary, awe-filled eyes:

“Am I excited! If the people of Butte aren’t proud now they ought to be. Oh, I am so proud of these people of Butte. I just can’t express it. I’m so thrilled. Every one of those people down there ought to be proud. They’re all part of it. For every piece of iron I put in that thing, there was one person standing behind me.” He continued “Oh, it was a beautiful dream come true. It was worth all six years. It’s fantastic to think it finally at last has come true.”

The whole story, and the long series of exceptional circumstances related to the construction of this monument, is told by its own protagonists in this video.

Since 2019, the people of Butte have been in talks with the local government While they have secured the land for such a venture, they have yet to break ground on this new project. Visit the slideshow below to find some detailed images of the statue. 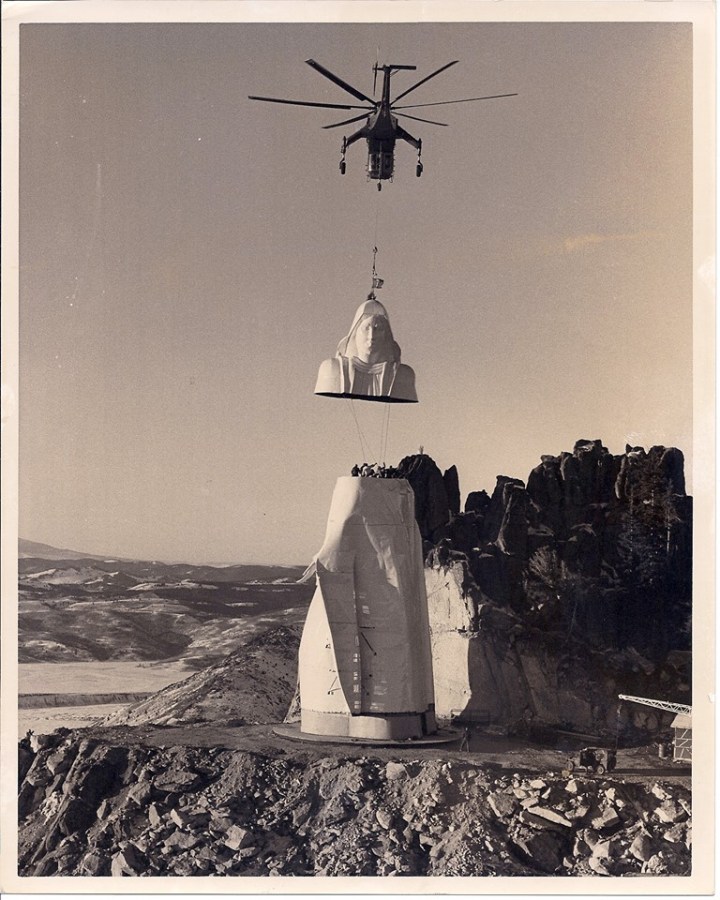