What is a monstrance? 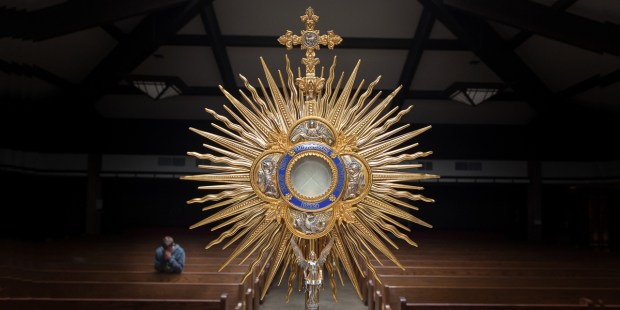 Connected to Eucharistic adoration, the liturgical vessel is traced back to the Middle Ages.

Expressions of faith in the Real Presence of Christ in the Eucharist have developed over time. One such development was the introduction of Eucharistic adoration outside of Mass and outside of the tabernacle. To facilitate this new devotion, a liturgical vessel called a “monstrance” was invented.

Monstrance comes from the Latin word monstrare, meaning “to show.” The purpose of the monstrance is to put on display a consecrated Host for those present to adore and venerate. The development of the monstrance can be traced back to the 13th century, when Eucharistic processions rose in popularity connected to the new feast of Corpus Christi.

At first, the Eucharist was carried in these processions in a closed ciborium (gold container) and it wasn’t until later that the ciborium used in the procession was elongated and included a clear section containing a single Host. The Catholic Encyclopedia explains how the monstrance was first constructed:

In the central cylinder a large Host was placed, being kept upright by being held in a lunette constructed for the purpose. Many medieval monstrances of this type are still in existence. Soon, however, it became clear that the [monstrance] could be better adapted to the object of drawing all eyes to the sacred Host itself by making the transparent portion of the vessel just of the size required, and surrounded, like the sun, with rays. Monstrances of this shape, dating from the 15th century, are also not uncommon, and for several hundred years past this has been by far the commonest form in practical use.

The monstrance is meant to highlight and draw attention to the king of kings, Jesus Christ, present in a real and substantial way under the appearances of bread. This is why a monstrance is typically gold and ornamented in a special way, in recognition of the divine mystery it holds and reveals.