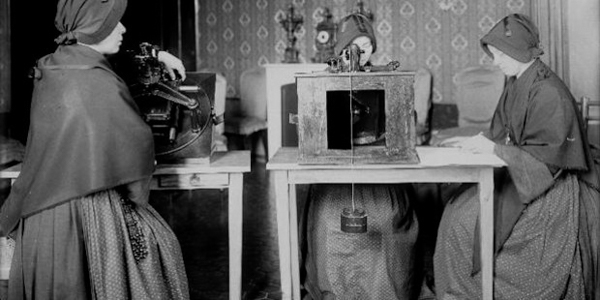 These “lady computers” spent over a decade completing one of the greatest astronomy projects of the 20th century.

According to an article in the Spanish news outlet ABC, it was practically by chance that one of those classic historical mysteries was solved: the identity of the four women who worked for more than a decade to catalogue nearly half a million stars, in the framework of an international astronomical project.

The person who made this discovery was the keeper of the archive of the Vatican’s Astronomical Observatory, 93-year-old Jesuit astronomer Sabino Maffeo.

Nonetheless, most of the merit belongs to American reporter Carol Glatz, of Catholic News Service, who reconstructed the story of these four nuns, the only record of whom, up to recently, was a black and white photograph in which two of them are peering through a microscope (yes, not a telescope) and another is taking notes on a shared table.

The story began at the end of the 19th century, in 1887—on the eve of the International Exposition of Paris—when a group of astronomers from around the world agreed to distribute among themselves portions of the night sky in order to create a rigorous celestial map based on photographs.

Of course, drawing up such a map required visually cataloging the stars of each part of the sky, and determining the exact position of each and every one.

In total, 21 astronomical observatories around the world took up the task, initially expecting that it would take them about 10 or 15 years.

Actually, it took much longer.

An Italian clergyman managed to get the Holy See to participate in the project. For this purpose, Pope Leo XIII reestablished the Vatican Observatory in 1891, and this institution (called the “Specola Vaticana” in Latin) built a great telescope, which was installed in a rotating dome approximately 24 feet in diameter inside the Tower of the Winds just a few minutes from St. Peter’s Basilica.

A few years later, a new director, Jesuit Father John Hagen, took over the Vatican Observatory. Aware of how incredibly demanding the task before them would be, he visited other observatories to see how they organized themselves for this endeavor.

He found a solution to his problems at the Greenwich Observatory: the so-called lady computers—women chosen for their precision at calculating coordinates.

But, as the time had not yet arrived when it would be normal to have a lay woman working in the Vatican, he thought that the most appropriate solution would be to ask for help from a congregation of women religious.

Journalist Carol Glatz narrates how, consequently, the priest simply contacted the convent of nuns nearest the observatory (the Sisters of the Holy Child Mary, who are still today the community of women who live closest to the Vatican) to request their collaboration, and an official letter was later sent to the superior by Archbishop Pietro Maffi of Pisa, whom Pope Pius X had asked to oversee the staffing of the Observatory.

According to archivist Sabino Maffeo’s reconstruction of the story, the congregation wasn’t enthused by the idea of “wasting” two sisters on something that had nothing to do with works of charity, but the superior ceded to the request because she felt that God’s hand was behind every petition the convent received.

So, in 1910, two religious sisters began to work at the Vatican Observatory, and later on, two more would join them. Their names were Emilia Ponzoni, Regina Colombo, Concetta Finardi and Luigia Panceri.

Sabino Maffeo discovered their names by chance, organizing old documents in the archives.

They worked for eleven years (until 1921), and according to the information collected by Glatz from documents conserved in the archive, the sisters analyzed the brightness and position of 481,215 stars.

The fruit of their labors, a 10-volume catalog, mentions their “swiftness and diligence” and their “zeal, surpassing any praise, for a job so foreign to their mission.”