This is why church pews were invented 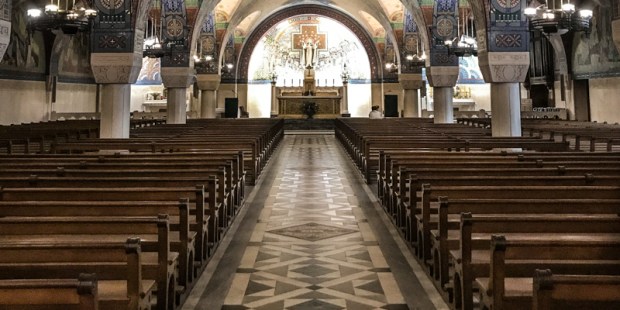 And why Catholic churches don’t always have them.

In the United States we see pews as a necessary and basic part of every Catholic church. However, pews are a rather recent invention and surprisingly didn’t even originate in Catholicism.

For most of Church history, worshipers stood during the celebration of Mass. There did exist a few scattered benches for the elderly to sit on, but in general the nave of the church was entirely void of places to sit.

This made practical sense, especially when kneeling became a common posture of the laity. Additionally, in medieval churches the pulpit was typically placed in the middle of the church, apart from the sanctuary. This meant the laity had to physically walk over to the pulpit to listen to the priest’s very brief homily.

There was so much movement during Mass that no one, including the priest, ever had a chance to sit down.

Pews were essentially non-existent until the Protestant Reformation. In most Protestant churches the emphasis during worship services was not the many liturgical movements, but the sermon given by a preacher. The interpretation of the Bible by the local pastor was a chief focus of Protestant liturgies and led to long discourses at the pulpit.

Pews were gradually introduced over time and were especially popular in English churches. On account of the expensive nature of pews, individuals and families would purchase pews and guard them with their lives. In some cases they even constructed “pew boxes” to protect them, locking them up so that nobody else could use them. Unfortunately there even arose various legal battles over pews as individuals regarded their seats as personal property.

Later on when churches could afford the installation of pews, they still relied on parishioners for additional income and began to “rent” pews. This practice was brought over to the United States from England and was adopted by the Catholic Church. Pew rentals were very common in Catholic churches and even authorized by the Third Council of Baltimore as a type of fundraiser.

Catholics, primarily in England and the United States, introduced pews in their churches after Protestants started using them. Homilies became longer in Catholic churches than before and sitting was more common during various parts of the Mass.

At the same time pews have not been readily adopted by Byzantine or Orthodox Christians. To this day most Eastern churches do not have pews and vigorously defend their choice. One Orthodox publication explains the spiritual reasons why they refuse to have pews in their churches.

Pews teach the lay people to stay in their place, which is to passively watch what’s going on up front, where the clergy perform the Liturgy on their behalf. Pews preach and teach that religion and spirituality is the job of the priest, to whom we pay a salary to be religious for us, since it is just too much trouble and just too difficult for the rest of us to be spiritual in the real world of modern North America. Pews serve the same purpose as seats in theaters and bleachers in the ball park; we perch on them …  to watch the professionals perform: the clergy and the professionally-trained altar servers, while the professionally-trained choir sings for our entertainment.

Pews are a recent invention in the history of the Church and are a tradition adopted from the Protestant Reformation to relieve worshipers of the need to stand during a homily. In many cases it is an invention welcomed by parishioners, especially for longer homilies. Yet, it is an invention not accepted by all Christians and the use of pews continues to be debated in certain churches.