They knocked him to the ground, but all he cared about was the Eucharist 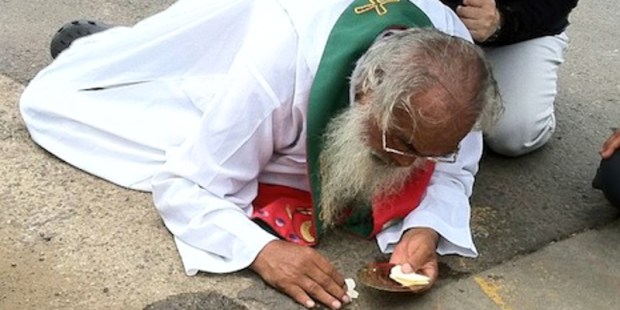 This image speaks volumes about the priesthood.

This photo speaks volumes: A priest, knocked to the ground as he was distributing Communion, who uses the strength he has left to gather the hosts and particles of the Eucharist that had fallen to the floor.

The picture was taken by an eyewitness who was at the attack in the town of Gangjeong.

The picture isn’t new — it was taken Aug. 8, 2012 — but it continues to speak to us of the great dignity of the priesthood.

The event occurred in Jeju, South Korea, as reported then by UCANews.

Father Bartholomew Man Jung-hyun was celebrating Mass at the doors of a controversial naval base the government was building in the area, and which was opposed because of the environmental impact it would have on the local populations and the island, which is a UNESCO World Heritage site.

The priest was celebrating a Mass for the citizens who were protesting the base, and was distributing Communion when the police interrupted the liturgy and began to beat those present, including Father Bartholomew.

The Diocese of Cheju immediately demanded an official apology from the police, as those present reported that one of the policemen stepped on the Hosts that had fallen to the floor. The police denied this.

But looking beyond the details of the event — the police brutality and the protests — we see the humble gesture of this priest, in pain and struck down, thinking not of himself but of his Lord … it’s an image that says more about the priesthood than a thousand theology books ever could.

Read more:
The Priest, and the Pieces of Christ’s Body He Protects