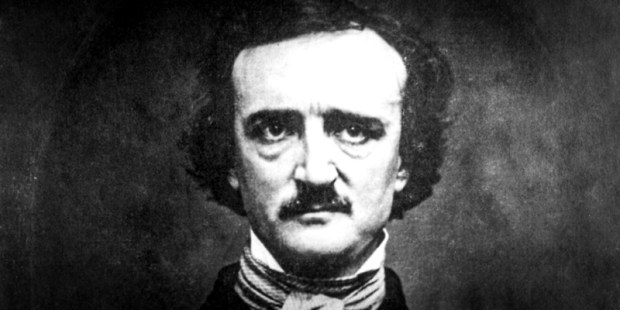 Poe may never have converted to Catholicism, but he did find a great deal of comfort in his associations at Fordham.

Literary scholars still debate exactly whose bells are featured in Edgar Allan Poe’s famous poem. Some say it was Grace Church in Manhattan. Others claim another Manhattan site, the Church of the Ascension. Another claim was made by Fordham University in the Bronx, not far from the three-room cottage where the ailing poet lived during his final years. Fordham alumni of a certain age once liked to argue that the university church’s bell, now housed in the archives, was the poem’s inspiration.

None of these has ever been definitively proven, but Poe certainly did visit Fordham (founded in 1841 as St. John’s College) during his Bronx sojourn, and he came to know the Jesuits there fairly well. He liked them, he wrote friend, because they were “highly cultivated gentlemen and scholars, they smoked and they drank and they played cards, and they never said a word about religion.” In his visits to the campus, the depressive Poe found some comfort and consolation in his loneliness.

In the summer of 1846, Poe, along with his young wife Virginia and her mother, had rented a home in what is now the Kingsbridge section of the Bronx. The area was still predominantly rural, numbering a handful of farms at most, offering some hope of comfort and stability. But within a few months Virginia, whom locals remembered as frail and beautiful, died. The grief-stricken widower found some solace in visiting her grave and in long walks.

Sometimes these walks took him by the Jesuits’ St. John’s College. Between Poe’s home and the college (formerly a colonial manor) was nothing but woods. One early 20th-century author commented, “Fordham is still so charming and rural a locality that we can imagine it to have been a poet’s true home before the first encroachments of a rapidly advancing city had broken its quiet.”

An early Fordham Jesuit remembered Poe as a “familiar figure at the college … It seemed to soothe his mind to wander at will about the lawn and the beautiful grounds back of the college buildings.” Another wrote: “It was one of Poe’s greatest gifts that he could make friends wherever he went. To know him was to love him … It was a pleasure to see him and still more to listen to him.”

More than scenery, however, a recent biographer notes that Poe “found intellectual and spiritual companionship” with the Jesuits at the college. In this sparsely populated community, there weren’t many people with whom Poe could discuss literature. The Jesuits, who sympathized with this starving artist, invited him to dinner many an evening, and gave him the use of their library. After dinner, he would peruse the library or play cards with the Jesuits, the majority of whom were French-born.

Usually he went home feeling better, but sometimes he couldn’t bear going back. On those occasions, when his grief was too palpable, one of the Jesuits would walk him home. Occasionally he stayed overnight at the college. One young Jesuit, the Canadian-born Edward Doucet, became quite close to Poe. Later the college president, Doucet was known and respected for his “discretion … straightforward manner, and enormous sympathy.”

For his part, Doucet recalled the poet as “extremely refined … a gentleman by nature and by instinct.” He became almost a confessor to the troubled artist. On their walks around the campus, Poe poured out his numerous troubles to the young priest as they conversed in French. Poe may never have converted to Catholicism, but he did find a great deal of comfort in his association with Doucet and the other priests stationed at this little college in the far wilds of the Bronx.

Sadly, Poe died under mysterious circumstances in Baltimore in 1849. Although it’s doubtful that his poetic bells rang from the Fordham University Church (then known as Our Lady of Mercy), the Jesuits did play a significant if minor role in his later years. They provided him a literary audience, a willing ear, dinner, and companionship.

To an extent largely ignored, they also provided pastoral care to a troubled, unhappy soul in need of friendship and compassion. It didn’t matter whether Poe was Catholic or not. Although a minor footnote in Poe’s life, as well as Fordham’s history, the Poe-Fordham connection illustrates the way Jesuits have lived out their charism of being “all things to all people.”

First published online in 2011. Used with the author’s  kind permission.