The meaning (and the legendary story) of an early Christian symbol

The Chi-Rho symbol is a superimposition of the first two letters (XP) of the Greek word for Christ, ΧΡΙΣΤΟΣ.

One of the most common symbols in Christian art is the Chi-Rho. It is created by superimposing the first two letters (XP) of the Greek word for Christ, ΧΡΙΣΤΟΣ. The monogram, also called a “christogram,” primarily represents Jesus Christ, but is also considered to be a common representation of the crucifixion scene. It is similar in style to the Tau-Rho (T and P superimposed), yet with a very distinct origin.

The symbol, however, seems to be pre-Christian in origin. Some sources claim that, prior to Christianity, the symbol may have been used by scribes to abbreviate the word chrēstos (“good” or, perhaps in a more accurate translation, “useful”), but it wasn’t until Constantine that it received a much deeper meaning.

According to the historian Eusebius, Constantine received a heavenly vision while praying.

What’s interesting is how the miracle was not private but rather, as Eusebius claims, witnessed by Constantine’s entire army. Constantine swore an oath regarding the account of the event. Even more so, at this time Constantine had not yet been instructed in the Christian faith and this event spurred him into deeper studies of Christianity.

The vision was confirmed that same night when, again according to Eusebius, Jesus appeared to Constantine and “commanded him to make a likeness of that sign which he had seen in the heavens, and to use it as a safeguard in all engagements with his enemies.”

Quickly after the vision, Constantine sought to fulfill the command and instructed his army to create the following image based on the vision he received:

A long spear, overlaid with gold, formed the figure of the cross by means of a transverse bar laid over it. On the top of the whole was fixed a wreath of gold and precious stones; and within this, the symbol of the Saviour’s name, two letters indicating the name of Christ by means of its initial characters, the letter P being intersected by X in its centre: and these letters the emperor was in the habit of wearing on his helmet at a later period … The emperor constantly made use of this sign of salvation as a safeguard against every adverse and hostile power, and commanded that others similar to it should be carried at the head of all his armies.

While  historians debate the authenticity of this tale, what is certain is after this event the Chi-Rho symbol spread like wildfire and was used in Christian art throughout the Roman Empire. Even to this day it is used in churches around the world and continues to represent the victorious God who has defeated sin and death.

Make sure to visit the slideshow below to learn more about symbols used by the Early Church. 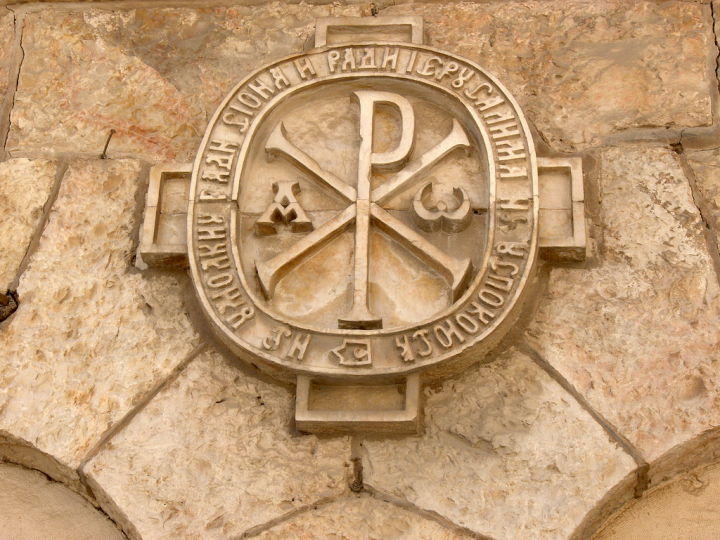