Why is there a picture of the Virgin Mary sleeping? 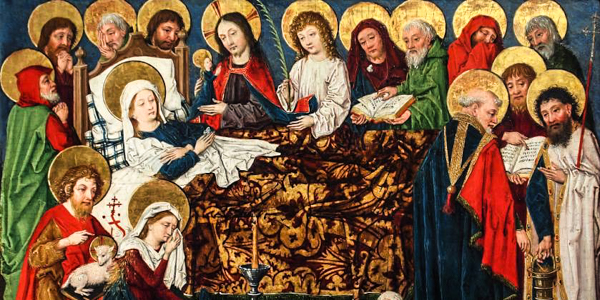 The image corresponds to an early belief of the Church called the “Dormition of Mary.”

Many in the ancient world described the act of dying as “falling asleep.” This concept is also found in the Bible, where in the Psalms we find this prayer, “Consider and answer me, O Lord my God; lighten my eyes, lest I sleep the sleep of death” (Psalm 13:3).

St. Paul also uses this imagery in his Letter to the Thessalonians in reference to Jesus raising the dead, “God will bring with him those who have fallen asleep” (1 Thessalonians 4:14).

When contemplating the mystery of the Virgin Mary’s departure from this world, many early Christians referred to it as the “Sleep of Mary,” or “Dormition of Mary” (from the Latin domire, meaning to sleep). This highlighted the belief that Mary died before being assumed into heaven.

St. John of Damascus, in the 8th century, relates how “St. Juvenal, Bishop of Jerusalem, at the Council of Chalcedon (451), made known … that Mary died in the presence of all the Apostles, but that her tomb, when opened, upon the request of St. Thomas, was found empty; wherefrom the Apostles concluded that the body was taken up to heaven.”

This particular tradition was very common in the early Church and has different variations, but most revolve around Mary dying in the presence of the apostles. The Eastern Church still celebrates the Feast of the Dormition of the Mother of God on August 15, the same day that Roman Catholics celebrate the Assumption. Both celebrate the same event, but use different terminology and emphasize different aspects of it.

Read more:
What does it mean to be “Roman” Catholic?

Officially the Church does not teach the exact nature of how Mary was assumed into heaven or if she died first. The Church teaches only that “the ever Virgin Mary, having completed the course of her earthly life, was assumed body and soul into heavenly glory.” However, St. John Paul II did mention in a General Audience, “To share in Christ’s Resurrection, Mary had first to share in his death.” The dormition/assumption was a unique grace given to Mary, a fruit of her Immaculate Conception.

With this in mind many ancient artists depict Mary’s dormition as her sleeping on a bed, surrounded by the apostles. Christ is typically in the center of the picture, often holding a miniature version of Mary, representing the action of Jesus taking Mary’s pure body and soul up to heaven.

It is a beautiful image to meditate on, and brings to mind the only way we can truly rest in peace, in the arms of our Savior.