The bi-locating nun who may have evangelized America 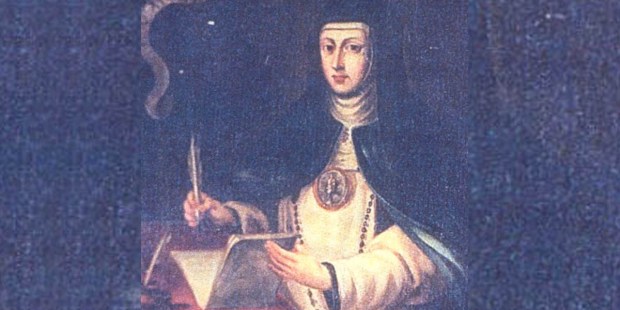 The Vatican is currently investigating the many stories surrounding the legendary “Lady in Blue.”

In 1602 Maria Fernández Coronel joined the Order of the Immaculate Conception located in Spain. The religious community was known for its blue habit, and she took the name Maria de Jesús.

She led a devout prayer life and her sanctity was well known. Sister Maria’s spiritual wisdom was even sought after by King Philip IV of Spain, who exchanged letters with her for more than 20 years.

However, Sister Maria became most well known for her apparent bi-location between Spain and New Spain (Texas and New Mexico). It is reported that starting in 1620 Sister Maria was mystically transported to a tribe of Native Americans in the New World and converted them to the Christian faith.

It is said that she encountered the Jumano Indians more than 500 times and, according to DesertUSA, “instructed them in the fundamentals of the Faith, speaking to them in their own language. Her spirit carried rosaries from her cell to give to her charges… healed the sick [and] won converts.” Sister Maria later urged them to contact the local Franciscan missionaries for assistance in starting a new mission.

The phenomenon was investigated by a priest who visited the area where these Native Americans were located. The priest spoke with the local Franciscans, who recounted how a tribe sought them out and told them a lady dressed in blue taught them the Christian faith.

The priest then showed the natives a painting of an older nun from the same religious community. They responded that the woman was wearing the same clothes, but that the woman they saw was younger and came from the sky.

Sister Maria’s mystical appearances became widely known and she was quickly interrogated by the Church. Surprisingly Sister Maria was able to recount events that occurred in the missionary territory and even recognized a priest who was present at the baptism of a Native American. Her bi-locating presence in the New World was apparently vital to the development of Christian missions in the region and her story has become embedded in local history.

Later on in life Sister Maria experienced visions of the Blessed Virgin Mary and recorded them in a book entitled Mystical City of God.

She died in 1665 and shortly after her death, was declared “venerable” by the Church. Her body was found incorrupt several hundred years later when her casket was opened in the 20th century.

Read more:
5 of the most remarkable incorrupt saints

Recently her cause for canonization has been renewed and Father Stefano M. Cecchin visited the area in Texas to research the claims. He said to the San Angelo Standard-Times, “There is a lot of proof that the Lady in Blue appeared to the Jumano Tribe. If that’s the case she would be the first woman evangelist in America.”