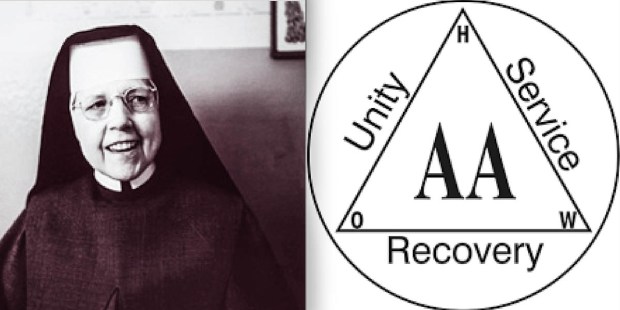 One commentator said: “If the Catholic Church doesn’t canonize her, the Protestants will make her a saint.”

What is Alcoholics Anonymous? AA is not, as is sometimes supposed, just another temperance movement, a new, fanatical reform crusade. It is a society, operating in groups, that is founded upon spiritual principles, and these principles closely parallel Catholic teaching.

In its reliance on grace, moral inventory taking, its confessional aspect and its emphasis on outreach, Haffner argued, “A Catholic member of AA should be a better Catholic as the result of his affiliation with this society and vice versa.”

Still, many are unaware of the role Catholics played in AA’s early years, or that one of the key figures was a nun from Ohio named Sister Ignatia Gavin, S.C. (1889-1966). At St. Thomas Hospital in Akron, she helped Dr. Robert H. Smith, AA’s co-founder, to dispel the notion that alcoholism was a moral defect, rather than a spiritual, mental and physical disease.

Bridget Della Mary Gavin was one of three children born to a farmer in County Mayo, Ireland. Even as a child, she had what her biographer calls a “raw compassion” for alcoholism:

Whenever I would see anyone under the influence of alcoholism, it actually made my heart sick. I would try to offer everlasting reparation to the Sacred Heart of Our Lord to make up for the offense against His Divine Majesty.

In 1896, the Gavins emigrated to Cleveland, Ohio. In an industrial city with a large working-class population, alcoholism was a big problem Parish priests started abstinence societies and young men took a “pledge” not to drink. Bridget graduated from Catholic schools, studied music, and taught music. Although she considered becoming a nun, her mother was opposed to it.

She dated and was even briefly engaged, but the call to religious life prevailed. In 1914, she joined the Sisters of Charity of St. Augustine, a community that ran schools and hospitals statewide. At 25, she was considered a “late vocation,” and given the name Ignatia. (Taking a new name signifies that a deep change has occurred in the person entering religious life.)

For many years, Sister Ignatia taught music in Cleveland schools until she suffered a physical breakdown. When she recovered, she transferred to hospital ministry. As her community opened St. Thomas Hospital in Akron in 1928, she was appointed the admitting officer. There she got to know Dr. Robert Holbrook Smith, who, after a bout with alcoholism, had been removed from the rosters of Akron’s more prestigious hospitals.

Beginning in 1934, Sister Ignatia began privately ministering to alcoholics with the help of a young intern, Dr. Thomas Scuderi. She tried to treat alcoholics from both a medical and pastoral standpoint, then an unchartered field. Scuderi recalled: “She was a great influence on my life as a physician. She taught me about loving people.” However, other doctors (and nuns, too) were less than supportive. Sister Ignatia later wrote:

I recalled very distinctly coming to the chapel for prayer shortly after five one morning, only to be met by the night supervisor who told me in unmistakable terms that the next time I admitted a D.T. [Delirium Tremens] to the hospital, I had better stay up all night and run around the corridors after him.

At a time when chronic alcoholics were routinely sent to mental asylums, Sister Ignatia realized that they needed a healing beyond what medicine could provide. At the same time, she noted, hospitals had “little enthusiasm about admitting people who were imbibing too freely.”

On August 16, 1939, Dr. Smith persuaded her to officially admit an alcoholic patient to St. Thomas. Back in 1935, Smith and Bill Wilson, a New York stockbroker, had founded Alcoholics Anonymous as a program of moral and spiritual regeneration. Working with them, Ignatia began the first hospital treatment center for alcoholics, which one historian calls “a model for many chemical treatment programs in the United States.”

Although slight and frail in appearance, her biographer Mary Darrah notes, “A knowing intensity of expression all at once overcame her otherwise fragile features.” Darrah further adds:

Put briefly, AA’s angel was a strong, empathetic woman who extracted goodness from every situation and resolved to leave the world a little better than she found it. Ignatia had all the charisma of an Irish anamchara, or soul friend, so she easily folded the troubled into her heart.

One patient recalled: “She saved my life. I found God and sobriety through her. She loved me when there was nothing about me to love. She was AA’s angel.” But hers was a “tough love” that required total abstinence from alcohol and drugs, acknowledgement of one’s dependence on a higher power, commitment to the AA program, and outreach to those still suffering.

Ignatia had a great devotion to the spiritual teachings of St. Ignatius Loyola, founder of the Jesuits, particularly his notion of “love through action.” She found a strong parallel between the saint’s writings and AA’s Twelve Steps. She routinely carried around with her a compendium of Ignatius’s thoughts, along with the 14th-century classic The Imitation of Christ. She gave copies of both to patients in the program’s early days. But her spirituality was also ecumenical. To a Protestant patient, she said:

The importance of our religion lies in our making it heavenly to those around us. In its essentials Catholicism is not as far apart as you suppose, from the beliefs of our separated brethren … love can surmount every obstacle.

In 1952, Ignatia opened Rosary Hill Solarium in Cleveland, where she worked for 14 years. During her lifetime, an estimated 15,000 alcoholics came under her care. As a result of her ministry, one author notes, “the alcoholics’ world changed.” At the time of her death in 1966, one commentator said: “If the Catholic Church doesn’t canonize her, the Protestants will make her a saint.” The Sisters poured more than 6,000 cups of coffee at her wake.