4 Remarkable women who each won a Nobel Peace Prize 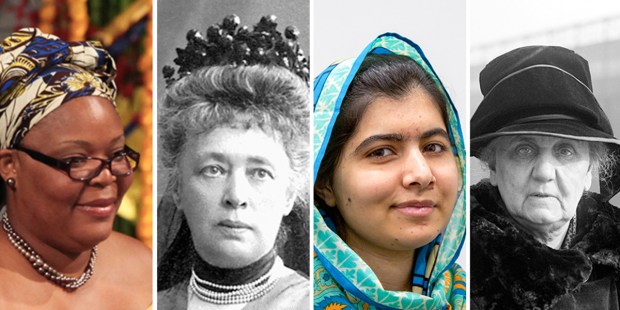 They’ve helped change the world, but you’ve probably never heard of them.

Two professors from the US were just awarded the Nobel Prize in Physics for the discovery of ripples in space-time known as gravitational waves, which were predicted by Albert Einstein a century ago but had never been directly seen. It’s been described as a discovery that “shook the world.”

These four women “shook” the world in their own way in their mission for peace:

She wasn’t just the first woman to win the Nobel Peace Price (1905); she was the person who inspired the creation of this world-famous award. Von Suttner had been Alfred Nobel’s secretary (Nobel, ironically, was the inventor of dynamite, and owned a weapons factory), and she kept a close friendship with him, even though she only worked in his office for two weeks. As a writer, she dedicated her work to promoting pacifism. Her novel Lay Down Your Arms (1889) was a literary milestone of the pacifist movement.

Bertha was a harsh critic of European leaders, whom she invited to stop encouraging bellicose patriotism and to seek solutions without weapons. In her constant exchange of letters with Nobel, she asked him to join the pacifist movement. Seeing the destruction caused by his inventions, he decided to devote most of his fortune to creating a prize that would recognize people who dedicated their lives to peace, science, and literature.

Her name and her face are familiar to many people. At the young age of 20, she is already a famous peace activist. She won the Nobel Peace Prize in 2014, when she was just 17 years old. She works incessantly to make the education of girls in her native country of Pakistan free and obligatory. Malala’s mission began when she was 14 years old, when she was intercepted by a group of Taliban fighters while she was heading home on a bus. They shot her in the head. Miraculously, she didn’t die, although she spent several weeks in intensive care. She and her family were forced to move to England for security reasons. Nonetheless, that event didn’t intimidate her; on the contrary, it made her intensify her efforts even more, and when she was 16, she gave a powerful discourse before an assembly of young people at the headquarters of the United Nations in New York. There, Malala declared that she would begin to advocate for dialogue with the Taliban to reach a peace agreement, because, in her words, “the best way to solve problems and fight against war is through dialogue and education.”

This activist was in charge of organizing the peace movement that put an end to the second civil war in Liberia, in 2003. The movement also made possible the election, for the first time, of a woman as the leader of an African nation: Ellen Johnson-Sirleaf took office as president of Liberia in 2005.

The heart of Gbowee’s struggle (about which you can learn more in the documentary Pray the Devil Back to Hell) was principally the mobilization of African mothers who wanted peace and safety for themselves and for their loved ones. “Women in leadership positions are efficacious intermediaries for peace,” she said when she won the Nobel Peace Prize in 2001 together with Sirleaf.

This American woman was one of the first people to establish a house to help the most disadvantaged in her country, effectively becoming an ambassador of social work. The institution she founded was Hull House, in Chicago, where she offered asylum, activities and education to immigrants, poor mothers, orphans, and other people who needed support in order to achieve reinsertion into society. Additionally, during World War II, Addams became a great activist of pacifism and a fierce critic of the United States’ participation in the conflict; in 1915, she founded the Women’s International League for Peace and Freedom. She was also a member of the suffragist movement. In 1931, she was awarded the Nobel Peace Prize (becoming the first American to receive it), but she could not attend the ceremony due to very poor health. She died four years later.

This article was originally published in the Spanish edition of Aleteia and has been translated and/or adapted here for English-speaking readers.