Pope says Christians’ greatest contribution to Europe must be re-focus on people, community 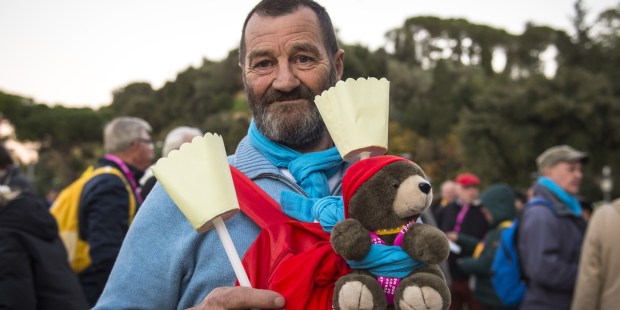 November 12 2016 : Procession, led by Card. Philippe Barbarin, and passage up to the Holy Door on the occasion of the jubilee of the homeless and disadvantaged people ending with a Vigil of Merc

Positive role of religion has to play a part in this, he says

Pope Francis on Saturday closed the “(Re)thinking Europe” conference organized by the Commission of the Bishops’ Conferences of the European Community (COMECE), calling the assembly of high-ranking prelates and European politicians to “revitalize Europe.”

In Europe, everything is often reduced to a debate about numbers, the pope observed. There are no citizens; there are “votes,” he lamented. There are no migrants, but “quotas”; no workers, but “economic indicators.”

“The greatest contribution that Christians can make to today’s Europe is to remind her that she is not a mass of statistics or institutions, but is made up of people,” the pope declared.

Christians, Francis said, are therefore called to “revitalize Europe” and reawaken its conscience. To that end, they must help the “Old Continent” to rediscover the value of its own past, he said, in order to enrich the present and build a future of hope.

Read more:
The one teaching of John Paul II that will change your life

This requires taking into account “the positive and constructive role” of religion in society. As an example, the pontiff spoke of the contribution of interreligious dialogue in promoting mutual understanding between Christians and Muslims in Europe.

“Regrettably, a certain secularist prejudice, still in vogue, is incapable of seeing the positive value of religion’s public and objective role in society,” the pope said, “preferring to relegate it to the realm of the merely private and sentimental.”

Europe is suffering from a kind of “memory deficit,” after the 1960s when Europe rejected the ideals that had made it great, he suggested.

A period of “dramatic sterility”

The pope described Europe’s denial of those ideals as a kind of “betrayal.” The European continent then entered a period of “dramatic sterility,” he said, firstly, because “Europe has fewer children, and all too many were denied the right to be born.”

Also, he continued, “there has been a failure to pass on the material and cultural tools that young people need to face the future.” Consequently, many young people are helpless in the face of an absence of “roots or prospects.” It would be particularly opportune, the pontiff continued, for new generations to rediscover the practical value of work and manual labor.

He also encouraged Europeans to rediscover a sense of community, which is an antidote against individualism, characteristic of a rootless society. In a community, the family—a place where diversity and unity are celebrated—is fundamental.