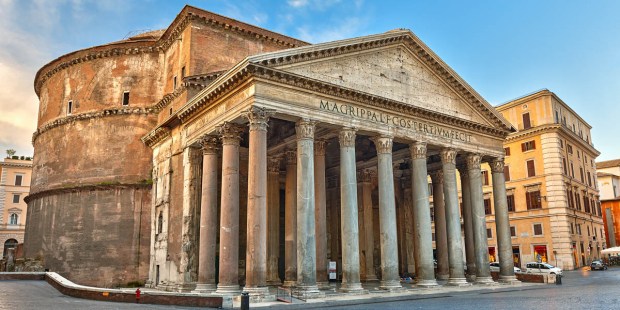 And how Halloween is closely related to it.

When Christianity was legalized in the Roman Empire, instead of tearing down Roman temples, Christians exorcized them and rededicated the buildings as Christian churches. An instance of this occurred on May 13, 610, when Pope Boniface IV consecrated a former Roman temple, giving it the new title of “St. Mary and the Martyrs.”

Built by Emperor Agrippa and completed around 126 AD, this temple was previously dedicated to all the pagan gods. It is known today as the “Pantheon” in reference to this original dedication and remains an architectural marvel of the ancient world.

When the Pantheon was first consecrated as a Christian church many relics of Roman martyrs were brought there from the catacombs, which helps explain its original name. Later on the title of the church was broadened to include “St. Mary and All the Saints,” but the feast commemorating its dedication remained on May 13.

Then on November 1, 735, Pope Gregory III dedicated a chapel in St. Peter’s Basilica to a variety of saints, making it a privileged feast day in the city of Rome. Shortly thereafter Pope Gregory IV established November 1 as a holy day of obligation in the universal Church dedicated to All Saints. To further cement the day, Pope Gregory VII transferred the Pantheon’s feast from May 13 to November 1, combining the two dedications to emphasize it and give it even more solemnity.

What may be even more interesting is that May 13 was the Roman festival of Lemuria. The festival centered on a Roman pagan belief regarding, “those spirits of the dead who are not evil, but who are also not family. When someone dies without heirs to care for their rites, they roam the land as Lemures, searching for someone, anyone, to take them into their homes … the idea of Lemuria is to provide something for them on their travels, but not enough to cause them to linger.”

Included in the rituals of Lemuria is an exorcism rite where these spirits are chased away with beans, and a gong is rung while saying, “Ancestral spirits, depart!”

It is believed by some historians that these rituals were transferred to the time around November 1 when the feast of “St. Mary and All the Saints” was moved to All Saints Day. Since some Romans kept their pagan traditions after they converted to Christianity, this is certainly a possibility and may be another explanation of how Halloween came into existence.