Is your doctor treating you based on your gender instead of your symptoms? 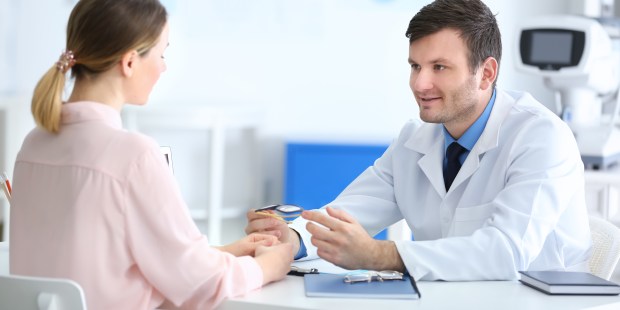 Here’s how to confront gender bias in health care.

Many women have experienced doctors — both male and female — dismissing legitimate medical symptoms under the umbrella of our gender. Whether it’s attributing unrelated symptoms to our menstrual cycle or dismissing pain as anxiety or “complaining,” doctors often eschew even the most basic of tests and miss textbook diagnoses.

One woman experienced dismissal and minimization for five years until she was finally given a simple thyroid test and diagnosed with Graves’ disease. She turned her experience into a comic strip at the Nib to illustrate the gender bias that women face in the doctor’s office. Her symptoms were indeed textbook symptoms of hyperthyroidism that had been explained away as psychological or menses-related by ER doctors, university doctors, and even her childhood primary care physician. In the end, it was actually a sleep therapist who finally recognized the symptoms of Graves disease and tested her thyroid function.

Her case is hardly unusual. The Week featured a long article about gender bias in healthcare, noting a series of 2008 studies which found that doctors tend to recognize classic symptoms of heart attacks fairly equally in both men and women — provided there were no psychological symptoms that might explain away the women’s physical symptoms.

Despite the popular conception of the quintessential heart attack patient as male, they seemed perfectly capable of making the right call in the female patient, too.

These studies and articles are finally bringing attention to the discrepancy in care between men and women, but it will be a long time before women can expect unbiased treatment at the doctor’s office. In the meantime, there are some proactive measures we can take to help ensure we get proper diagnoses and treatment.

First, be aware that certain diseases present differently in women. Heart attacks, for example, usually don’t cause sudden and intense chest pain in women. Instead, women tend to experience jaw pain, upper back pain, nausea, and fatigue during a heart attack. Even heart disease affects women differently, usually as non-obstructive coronary artery disease which can’t be detected using the male model of obstructive coronary heart disease testing. So if you are at risk for heart disease, don’t ignore that risk because you don’t have typical symptoms — and don’t let your doctor ignore it either.

Which brings us to the second way we can fight gender bias: Be your own best advocate.

This is hard to overstate, given the tendency to accept our doctors as the authority on our health. But you know your own body best, and you generally know when something is wrong. Trust that feeling, and push for answers (or tests, at the very least) when physical symptoms are dismissed or minimized. Find a different doctor if you have to, but be firm in your quest to find a diagnosis instead of a mere explanation.

If you suffer from unexplained pain or chronic illness, enlist an advocate to accompany you to doctors visits and ER trips. Having a person with you to confirm your symptoms and keep a clear head is invaluable. He or she can help ensure that the doctor is seeking both a diagnosis and treatment options by objecting to any attempts at minimizing, dismissing, or explaining away your symptoms.

Last, but certainly not least: Remain calm. It’s grossly unfair that women are dismissed as “hysterical females” in alarmingly large numbers, but it’s reality. The most effective way to prevent medical symptoms from being dismissed as stress or anxiety is to avoid the appearance of being stressed or anxious. Don’t dwell on stress and anxiety in your conversations with the nurses and doctors, either — try and keep the discussion focused on your physical symptoms.

Above all, don’t lose hope. There is increasing awareness of the gender bias in medical care, and both male and female doctors are fighting for equal treatment for female patients. If your doctor isn’t one of them, keep looking until you find one who is.