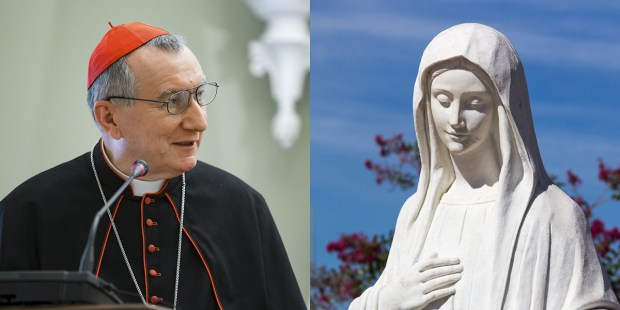 Cardinal Parolin speaks of shrine on trip to Croatia

During a three-day trip to Croatia that concluded Tuesday, Cardinal Pietro Parolin, the pope’s secretary of state, mentioned the question of the shrine at Medjugorje in Bosnia-Herzegovina while speaking to the press, according to a report by the Italian Catholic news agency SIR. The Holy See, the cardinal explained, wants to “regulate” the pastoral situation at the Marian shrine.

At Medjugorje, there are two questions to deal with, Cardinal Parolin explained: that of the apparitions, and that of the “pastoral care” of pilgrims.

Regarding the second point, the Holy See wants to “help to regulate” the phenomenon so that the faithful can listen to the Word of God, celebrate the sacraments, and thus “have an authentic experience of faith.” The shrine of Medjugorje is known as a popular location for confession.

Last February, Pope Francis named Archbishop Henry Hoser as special envoy for Medjugorje, precisely so that he could study the issue of pastoral care at the site. He was not given the task of making a pronouncement on the question of the apparitions. His report was sent to the Holy Father in June.

Another commission, presided over by Cardinal Camillo Ruini, was established in 2010 by Benedict XVI to focus on the apparitions themselves. The commission’s conclusions were filed in 2014, but they were never published. They are “in [Pope Francis’] hands,” said Cardinal Parolin.

In the small town of Medjugorje, located 16 miles southwest of the capital city of Mostar, the Virgin Mary is said to have appeared since 1981. Among the six original visionaries, some claim that they still see the Virgin Mary regularly—daily, monthly, or once annually.

Read more:
A member of the Medjugorje Commission explains the pope’s skepticism

Read more:
Archbishop Henryk Hoser to Aleteia: We should not be worried about Medjugorje!