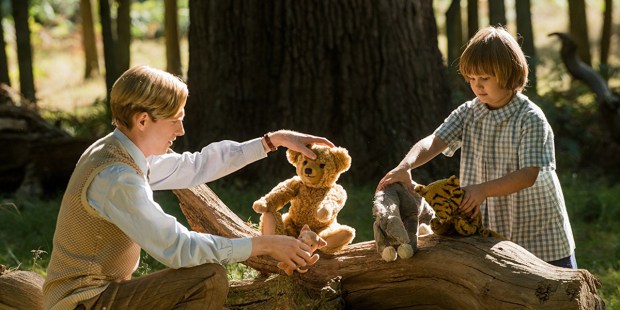 The famous character’s real childhood wasn’t all whimsy and honey — and we can learn something from that.

The adventures of Winnie-the-Pooh didn’t begin with a bear. They began with a boy.

He was called Billy Moon then, not Christopher Robin. The “Moon” came from how he first pronounced his last name, Milne. The “Billy” was simply a nickname. He was the son of parents who, according to the film Goodbye, Christopher Robin, didn’t have much time for him. His father was a successful playwright, but suffering from the aftereffects of what he saw and heard and smelled in World War I. His mother was a beautiful socialite, obsessed with dresses and parties and success. His nanny, Olive Rand, was the center of Billy’s early life, and his biggest influence.

Well, that is, until the bear came along. And Billy’s life changed forever.

The trailers for Goodbye Christopher Robin make the movie out to be a delightful, heartwarming, feel-good story. And sure, it has its moments. But the film is a darker thing, too, and more complex. Winnie-the-Pooh — a stuffed hero to millions (including me) — plays a villain here, too. Thanks to father A.A. Milne’s books about him, Pooh becomes the center of an idyllic written childhood, but the bear’s very popularity twists and distorts Christopher Robin’s real childhood.

I really enjoyed this movie, but it made me pause, too.

But as Goodbye Christopher Robin so poignantly illustrates, sharing your precious family memories with an audience can blur the line between private and public. You open your family and their experiences to a wider world.

To this day, I still enjoy private moments with my kids … A run with Emily. A soccer game with my son Colin. Just me and them. Just like when they were younger. Me and them.

But then, sometimes, if something particularly fun or poignant or interesting happens, it changes. It’s not just me and them: It’s me and them and others. Not hundreds of millions of others, as in Christopher Robin’s case, but enough to make a private moment not-so-private anymore.

Maybe we are all a little guilty of that now, what with social media such a big part of our lives. Our private lives become public. We share it all with a push of a button.

I’ve enjoyed some of the viral videos I’ve seen of kids: David After Dentist, for instance, or Charlie Bit My Finger. But I sometimes wonder how these kids might feel about these videos 10 or 20 years later. To be primarily known — as Christopher Robin became to be known — as a character more than a person.

I love to see the Facebook posts of my in-the-midst of parenting friends, too: The birthday party pictures, the funny stories, the videos. But are there times when we should be more selfish about the moments we share with our kids? When we reserve moments for just us and them?

It reminds me of a scene from another movie — 2014’s The Secret Life of Walter Mitty. In the movie, Walter Mitty is on an around-the-world quest to track down elusive photographer Sean O’Connell. He’s a legend in his field and has documented plenty of real life joy and grief. When Walter finally finds Sean, he’s in the Himalayan mountains — spending weeks searching for an uber-elusive snow leopard.

And as they talk, the snow leopard suddenly makes his appearance.

Walter stares in stunned silence. And as he watches, he realizes that Sean isn’t snapping pictures. He’s not even looking through his camera’s viewfinder. Aren’t you going to take a picture? Walter asks.

“Sometimes I don’t,” Sean says. “If I like a moment, for me, personally, I don’t like to have the distraction of the camera. I just want to stay in it.”

“Yeah,” Sean says, tears welling up in his eyes. “Right there. Right there.”

In our harried world, in which sometimes it seems our whole lives are documented, we lose that sense of presence — that sense that the best moments, perhaps, should be like a sunrise or summer’s day: Beautiful and fleeting, and all the more beautiful because of their transience. And perhaps it’s something to remember with our children, too.

Take photos. Make videos. Share stories. But remember the beauty and sanctity and brevity of childhood. Be there for your kids. Be with them. Be right there. Right there.

Read more:
If you want to remember something, don’t take a picture of it — here’s why

Read more:
The Time Christopher Robin Shot Winnie-the-Pooh with a Gun, and Other Censored Stories

Read more:
“Poor A.A. Milne”: In Which Winnie-the-Pooh is Reclaimed from Disney