Spencer: The first Trappist brewery in the “New World” 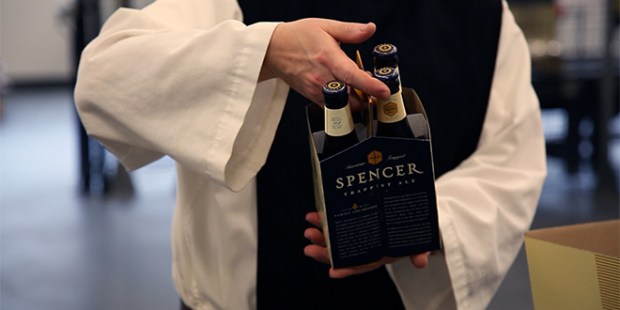 Amid the exploding popularity of artisanal beers, the original masters of the craft are finally able to show America how it’s done.

A new destination is being added to beer tasters’ lists. The classic beer route has, for centuries, been clearly drawn along a line passing through some very selective traditional European destinations (Bavaria and Belgium being indisputably at the top of the list). Now, that’s changing. Microbreweries—local breweries with a production amount ranging from small artisanal quantities to volumes akin to  small- or medium-sized factories—have multiplied in the United States, in amounts never seen before. They have boosted a parallel beer-tasting economy that invites fans of hops and malts to travel to breweries throughout the country, from the West Coast to New England.

However, it wasn’t until December 10, 2013 that the most eagerly awaited Mecca of American beer opened its doors. St. Joseph’s Abbey in Spencer, Massachusetts—about 60 miles from Boston—was finally certified by the International Trappist Association as the first Trappist brewery in the United States.

Supporting a monastery with beer and preserves

The history of St. Joseph’s, of course, is much longer: it begins in the 19th century. A group of monks of the Order of Cistercians of the Strict Observance, fleeing the violence of the French Revolution (1789-99), was sent from France to North America with the hope of founding a monastery. The first monastery—built in Nova Scotia in 1819—was destroyed by fire in 1892. Another conflagration less than ten years later would put an end to the first attempt to rebuild at the same location. The new monastery, eventually built in Rhode Island, would meet the same fate in 1950—as the third fire to devastate the community’s installations in less than 60 years.

With no roof over their heads and deprived of the ability to support themselves with their own manual labor—as established in the Rule of Saint Benedict—the monks ended up moving in 1950 to property they had recently acquired in Spencer, Massachusetts. There, in order to be able to start earning their sustenance, they began producing and selling mint jelly, made with herbs grown in the monastery garden. The preserves became so popular that today “Trappist Preserves” are sold in more than 30 flavors.

However, visitors to St. Joseph’s in Spencer no longer go to the threshold of the monastery seeking only the sweetness of the jams and jellies. On the contrary, they are after the bitterness of Petersbier (“fathers’ beer” in Flemish), a “full-bodied, golden-hued ale with fruity accents,” unfiltered and unpasteurized, made with only four ingredients. It is the first beer produced outside of Europe to be certified as an authentic Trappist brew.

It’s a light “refectory ale”—that is to say, it is brewed as a part of the monastic diet, which is almost exclusively vegetarian, with an alcohol content lower than that of the Trappist brews on sale in Europe, which are much stronger than the American variety.

Why now, and not before?

Although it’s true that beer production has been a part of the European Trappist tradition since the 17th century, it’s also true that other monasteries of the Order have maintained themselves by making other products, ranging from coffins to cheese. The debate over whether to start a brewery in Spencer lasted more than 10 years, the monks recount. Why have the monks in Spencer decided to start brewing beer only so recently?

The answer, sadly, isn’t as lighthearted as we would like, and it has little to do with the difficulties proper to running a business on this scale.

The fact is that the United States, as a country with a Protestant majority, even today harbors a certain anti-Roman prejudice, and has always looked askance at monks brewing beer. Not even the abundant German, Irish, and Italian immigration of the 18th, 19th, and 20th centuries was able to prepare a sufficiently tolerant atmosphere so that the Trappist monks at the Abbey of Gethsemani, in Kentucky—where the famous monk Thomas Merton made his vows and lived—could combine the production of cheese with that of beer.

However, other considerations came into play. The infirmary of St. Joseph’s Abbey in Spencer, with beds for 12 monks, is full most of the time. The cost of supporting the abbey’s elderly monks (the oldest member of the community is 99 years old at the time of this writing) has become unsustainable due to the increasing prices of medical services in the United States. This situation has forced the monks to seek out new ways of increasing their income so they can maintain both the monastic community itself and the works of charity that are supported by the Abbey’s activities.

After many visits to various Trappist abbeys in Europe, the monks from Spencer decided to undertake the enterprise of setting up a brewery that would be as automated as possible, thus making minimal demands of manual labor on the older monks (the average age of the monastery’s inhabitants is around 70).

As Fr. Isaac Keeley told Reuters, “Monks don’t really like change. But when we started to run out of options for a revenue source, we started listening.” This listening has turned into an unexpected success—initially in Massachusetts and the nearby states of Maine and Rhode Island, and now throughout the country; you can even order Trappist brews online for shipping to the lower 48 states. It’s also distributed in several European countries. Given the popularity of their beverages, it would seem that God has blessed the monk’s project, the fruits of which can be tasted by those who visit the Abbey as guests for a retreat or as day visitors. As Chesterton said, “In Catholicism, the pint, the pipe and the Cross can all fit together.”