People are going wild over this artist who paints songs (PHOTOS) 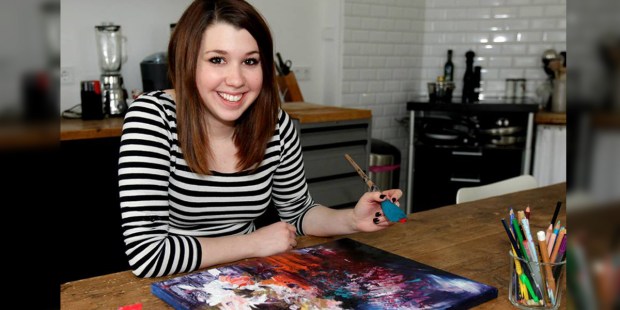 Every artist has a vision for their work, but for Melissa the vision is a bit more literal. Melissa S. McCracken has synesthesia, a neurological phenomenon that causes one’s senses to overlap in response to stimuli. “It occurs when stimulation of one sensory or cognitive pathway (e.g. hearing) leads to automatic, involuntary experiences in a second sensory or cognitive pathway (e.g. vision).” Only approximately 5 percent of the population experiences this.

For Melissa, her synesthesia means that when she hears music, she also sees it. “There are some songs that I hate, but that I like the way they look,” she jokes. Though she began painting music as a concrete way to explain synesthesia, now people have gone wild over the beautiful creations.

Melissa says that the prettiest genre of music is jazz, which translates to hues of blue and gold in her mind. Though she isn’t “musically inclined” herself, she loves to be able to create with music in her own way.

You can hear more from Melissa in the video below.

Read more:
These hypnotizing gifs were created by an unlikely artist (VIDEOS)

Read more:
Music Speaks to Us: One Artist’s Story