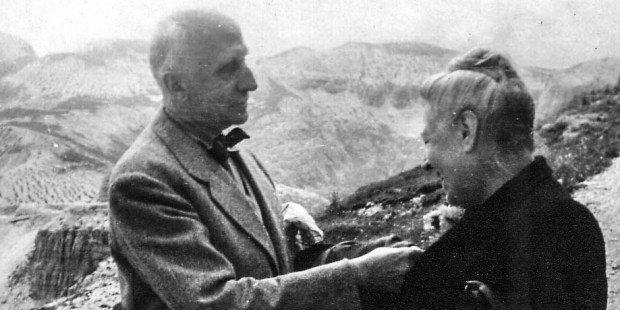 He started out a mediocre Catholic, she suffered with each new pregnancy — these two are real humans and real saints.

There was nothing ordinary about Blessed Luigi and Maria Quattrocchi, but you certainly wouldn’t have known it to look at them. They were a married couple with four kids. They weren’t foreign missionaries or martyrs, they didn’t raise canonized saints, they didn’t start a world-changing movement. They were just a holy couple raising holy kids — the most extraordinary of ordinary callings.

Luigi (1880-1951) studied law and became a civil servant. Though he was a good man, he wasn’t a particularly faithful Catholic in his youth. Maria (1884-1965), on the other hand, was quite pious, despite being raised by parents with very short tempers.

Luigi and Maria met as young adults but were only friends until Luigi fell ill and Maria realized her love for him. Not long after, the couple’s courtship began in earnest and they were married on November 25, 1905. As with many couples who are madly in love, babies followed — and fast. On their fourth anniversary, Maria was two days away from giving birth to their third child. The oldest had just turned three.

Luigi and Maria were open to life, but that openness didn’t mean that discovering that they were expecting always brought feelings of unadulterated joy. For Maria in particular, each pregnancy was filled with mixed emotions. Her first sparked fear in her, the second despair. “Who will give me the strength to think of two children?” she wrote to her husband. “To endure the physical and physiological exhaustion of pregnancy and the rest?”

“I’d prefer anything to another pregnancy,” she wrote in another letter. “How can I take care of both children in the state I’m in?” There’s something terribly comforting in realizing that emotions aren’t sins and that even the saints may have taken some time to warm up to the idea of an unexpected pregnancy.

Overwhelmed as Maria may have been each time she conceived, God was doing beautiful things in her and in Luigi through their marriage and parenthood. While Luigi had previously been apathetic about his faith, his relationship with Maria had inspired him to run after holiness.

The couple began each day with Mass, prayed the rosary as a family, and sought always to outdo each other in selflessness. They were also a noisy and active family, enjoying hiking and trips to the beach. Maria wrote books and articles about education, motherhood, and family life; she spoke to women’s groups as well, encouraged by her admiring husband.

It was rather an idyllic way to live — until Maria’s fourth pregnancy. In 1913, she was diagnosed with placenta previa; the doctors gave them a 5 percent chance of survival and urged the young mother to abort her child. For the Quattrocchis, such a step was out of the question. They laid the lives of mother and child in the hands of their loving savior. In her eighth month, a very weak Maria was induced and, by God’s grace, little Enricchetta was born healthy.

After that scare, ordinary life continued. Over the 46 years of their marriage, Luigi and Maria worked with various different lay Catholic groups. Maria served as a Red Cross nurse in Ethiopia and later in Rome during World War II, during which time the couple harbored refugees and smuggled Jews out of the city.

Both the Quattrocchis’ sons became priests and their oldest daughter a nun. One would expect two saints to be delighted, but the Quattrocchis were human. As much as they wanted their children to follow God’s will — and supported them in doing so — it still hurt them to feel they were losing them. Enricchetta recalled: “I can still see the silent, discrete tears of my father on his knees, while on the other side of the grille, the ceremony of his daughter’s taking of the habit took place.”

Though his heart broke, Luigi said yes. This was something he and Maria were in the habit of doing, most notably in the vow of celibacy they took after 20 years of marriage. Yet even that was simply a silent flourishing of their desire to sacrifice everything for love of their Lord.

There was nothing showy about their faith, nothing that demanded attention. At Luigi’s funeral, a friend of his who was an atheist and a freemason said to the Quattrocchi sons, “Your father never pestered me with sermons. But I want to tell you: It’s through his life that I discovered God and that I love the Gospel. Pray for me!”

This is the message of Luigi and Maria Quattrocchi’s life: a life so filled with small moments of beauty and love and sacrifice that in the end it all blurs together into what seems like an ordinary life, but one shot through with glory.