Pope Francis: Pass on the “truly rich heritage of the Latin tradition” to the young 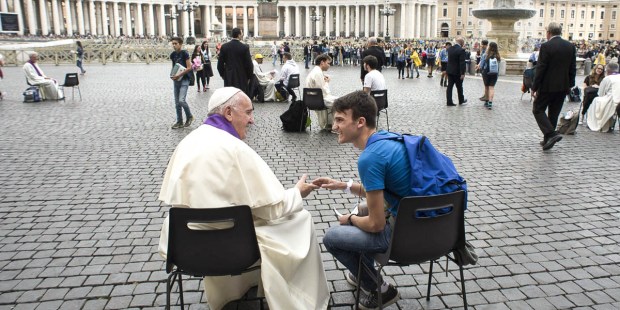 In this year’s Pontifical Academy award ceremony, the pontiff invokes St. Augustine to remind the faithful of the urgency to look to the Church’s Latin roots.

The Holy See announced on Wednesday that on the occasion of the Pontifical Academy award ceremony, held on December 5, 2017, Pope Francis had written a message. He stressed how it is “urgent” to rediscover the Latin tradition and to pass it on to our youth, while at the same time honoring the Pontifical Academy for Latin this year.

Each year the seven pontifical academies, headed by the Pontifical Council for Culture, award a prize for works on “Christian Humanism,” which is assigned to one academy in turn. For the first time the Pontifical Academy for Latin, established in 2012 by Benedict XVI, was responsible.

The Latin tradition – as much Christian as classical, wrote the pontiff in his message — has studied in depth the “dynamism” of man’s “interiority” which leads to “a profound change; coherent, and non-hypocritical,” that is to say, to conversion. Peter’s successor therefore called the faithful to “cherish the truly rich heritage of the Latin tradition” and to pass it down to younger generations.

According to the Pope, this is “urgent” in current times, marked by the “division between the heart and the spirit, between interiority and exteriority.” The pontiff highlighted in particular the thoughts of St. Augustine (354-430) in the Confessions, where the saint points at the need to fight against “the hypocrisy which masks the gap between appearance and the heart.”

A post-doctorate and French teachers were distinguished

Two laureates ex-aequo were awarded this year, including Pierre Chambert-Protat, for his thesis on Florus de Lyon, a 9th-century deacon in the 9th century who penned a number of works. Equally rewarded was Francesco Lubian for his critical review of Distiques, ascribed to St. Ambrose.

In addition to the prize, two pontificate medals were awarded: To a group of Latin teachers from University of Toulouse-Jean Jaurès, for the publication of a “precious” Latin manual for universities, and to Shari Boodts, from Louvain Catholic University (Belgium), author of a critical review of Sermons by St. Augustine.