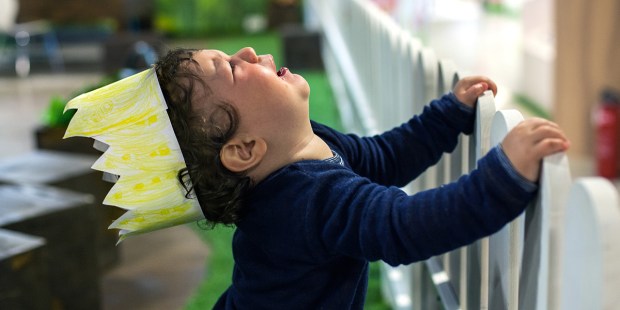 The solution to your short temper may surprise you.

Becoming a new mom was probably one of the most magnificent experiences of my life. It was a time filled with wonder and worries, anxiety and excitement. Yet, in the midst of all these mixed emotions, I could only envision moments of tenderness and pure love with my soon-to-be newborn. Sure, motherhood would be difficult and there would be great challenges, but I was certain love would conquer all. I soon learned that simple moments of prayer would be the best source of grace and much-needed strength that would get me through the toughest moments that lay ahead.

The day finally arrived. Our first son was born. Then, less than two years later, we were blessed with another baby boy. We had our share of sleepless nights and “napping while baby napped” simply didn’t suffice. Even so, my heart was brimming with love. I reached out to friends who were veteran moms and they helped me through the rough spots. But indeed, it was prayer that always gave me a sense of peace and reassurance. During quiet nap times or while our youngest son nursed, I spoke to God. Those were my moments of great grace, and they saw me through.

Soon, my oldest son was on the threshold of toddlerhood. I was ready; I had read every book I could get my hands on about the “terrible twos.” Although I was up for the challenge, nothing could prepare me for the reality that was before me. Overnight our son morphed into a mini-tyrant. What had gone wrong? Our toddler got up “on the wrong side of the bed.” Every. Single. Morning. There was nothing we could do to please him. Nothing!

Day-to-day life continued just the same. I refused to allow my son’s tantrums to rule my life and rob me of my peace. I was in control as I ran my errands as usual. I acted as if all was well despite carrying a flailing, screaming toddler under one arm and an awkward car seat in the other. Don’t get me wrong, it was onerous. At times, it felt like I had been coerced into signing up for a full on military boot camp; only, the drill sergeant happened to be a snot-nosed, three-foot toddler that I had birthed just two years earlier. My days of quiet conversations with God were long gone.

It was during one of these harried afternoons that it happened. We had just gotten home after a chaotic day. I was trying to pin my son down for the umpteenth time so that I could strip him of his winter garb. Then, it was as if time stood still. I entered another dimension. I was transported straight into a scene from the old Incredible Hulk series. I began to mutate. My eyes started bulging; my body began to tremor and my voice lowered an entire octave as strange sounds arose from my throat. It was like an out-of-body experience.

Soon I had turned into a roaring, screaming, lunatic. I became unhinged as I started yelling “Stop! Stop! Stop!” With each “stop” I progressively yelled louder. I finally pinned my son down with one hand and angrily yanked off his jacket, hat and gloves with the other. I was exasperated! I continued on, and yelled again, “Would! You! Stay! Still! That is enough already!” My son was transfixed as he watched my face contort in anger. Then, I was done. I let him flee as I slumped over, exhausted, defeated and ashamed.

Patience was never my virtue. Somehow, I had assured myself that the sweet, tender moments would surely tame the hulk inside. I was dead wrong. I had gone so far as to give up my precious grace-filled moments of prayer, when I needed them most. Everyone knows the toddler years are some of the toughest. If nothing else, I should have made time to pray precisely because it was rough. Yet, now I found myself yelling often and I was hurting my children in my anger.

I had convinced myself that there just wasn’t enough time to pray. Of course, there is never enough time. Some days, just brushing my teeth was like a small miracle. I knew in my heart I had to recommit to prayer once again; for my children’s sake and for my sanity. I decided to get up 15 minutes early every day. I arose every morning in the midst of the silence, while the darkness still blanketed the early morning sky. I was exhausted and sometimes fought to stay awake but soon it became something I looked forward to. I needed the quiet time to recharge for the new day. I turned back to my simple conversations with God.

Every morning I began by praising God for being, well, God. I thanked Him for being present in my life and for loving me. Next, I asked Him for forgiveness for what I struggled with; essentially, my sins. Then, I thanked God for all of my blessings. I would, one by one, count all the blessings I could think of and simply thank Him. I would then pull out my long laundry list of needs (for myself and for others in my life) especially for my children. I specifically asked Him to be patient for me and to be tender and loving in the most turbulent moments, for me. It assured me that He would be my strength. I knew I didn’t have it myself. Finally, I would end my prayer by offering up my entire day to Him. In essence, I surrendered; I recognized that I could not do it without.

Praying doesn’t come naturally to all of us. It wasn’t always easy for me. For some of us it may not even be something we have attempted before. Yet, the great thing about prayer is that it’s just like a conversation with a friend. It can start with a simple exclamation in your most desperate mommy moment: “I need your help God!” Or it can be a simple thank you for getting through yet another day with your little ones: “Thank you for seeing me through, Lord.” It can be audible or kept internally, between you and God. No matter what you say or how you say it, what is most important is that you begin that dialogue. Soon, enough you will find yourself in a continuous exchange with God. Oh. And, yes. He will reply. Just take time to listen.

As the weeks flew by I began to notice an internal peace that I hadn’t sensed in a long time. I began to take time to really listen to my children. I paused before reacting and I heavily relied on that quick prayer in moments of distress. However, it was on one particular occasion that I realized that God had achieved a significant change in me. As my screaming, thrashing, hysterical 2-year-old went into one of his typical fits, I met him not with my anger or frustration, but with a long, comforting hug. I held him tight as I shushed in his ear. I gently rocked him back and forth as his screaming slowly subdued into whimpering. I lovingly whispered again and again, “It’s okay. I love you. I love you.” At long last, the fruit of my prayer was tangible. I was able to meet this storm with calm; with love and patience.

Yes, I still yell on occasion. Yes, I still let my little ones get the best of me every now and again. Yet, in my simple moments of prayer, I have realized something important: It is precisely in the ugliest, messiest part of my life that God wants to give me His grace. I came across a Scripture passage that I have memorized since and often repeat to myself in the most challenging moments: “My grace is sufficient for you, for my power is made perfect in weakness.” (2 Cor. 12:9). Prayer begins like a tiny little flame and the more we pray, the more that flame grows. Soon the fire turns into a burning desire to give God your all. This fire will change us from within if we allow it. Heck, it can even transform this hulk into a loving, tender mommy. Give it a try. You won’t regret it.