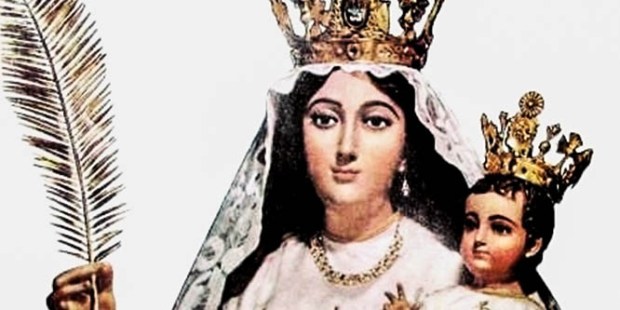 The faithful of El Salvador are devoted to Our Lady as the Virgin of Peace.

Our Lady’s presence — in the life of Jesus, the life of the Church, and our life — is personal and persistent.

Mary wants us to be able to count on her. So much so, that if we don’t already know her and aren’t aware of her presence, she will come up with creative ways to enter our lives and make her love and protection felt.

In El Salvador, this meant mysteriously washing up on a beach shore.

It was 1692, and the country was rift with violent conflict. A few merchants traveling along the beach found a wooden box. They couldn’t open it, so they took it with them to the nearby city of San Miguel. Someone pried open the box, and found a statue of the Virgin Mary holding the Infant Jesus.

Based on the style of the statue, it has been speculated that it was of European, possibly Spanish origin. There was no way for the people to figure out where the statue had been going, or how it had gotten to their shore. It didn’t really matter, though. The unknown origins of the statue only made it clearer to the local people that Our Lady had freely chosen them. She wanted to make her presence known to them and had found a way to make it happen.

Shortly after the arrival of the statue, the civil strife inexplicably ended. The people attributed their peace to the Virgin’s presence, and began calling her Our Lady of Peace.

A century later, Our Lady again came to the rescue of San Miguel when a nearby volcano erupted in 1787. The lava flowed toward the city and threated to destroy the entire area. The people of San Miguel knew that Mary could help them. They took the image to the front door of the parish church and begged her to protect them. Right before entering the city, the lava changed directions and headed south instead.

Read more:
The tsunami that receded when it was blessed with the Blessed Sacrament

After these signs and countless other favors bestowed on the region and its people, it is no wonder that Our Lady of Peace became so beloved to the El Salvadorians, who began asking for her to be made patron of their country.

Pope Benedict XV granted this request. Pope Paul VI later reaffirmed her status and assured the nation that Our Lady’s presence would be with them always by further elevating her status, naming her the primary patron of El Salvador in perpetuity.

Our Lady of Peace of San Miguel, pray for us!

Read more:
Do you know the 7 joys of the Blessed Virgin Mary?