Yeah, he’d been homeless … but he was my friend 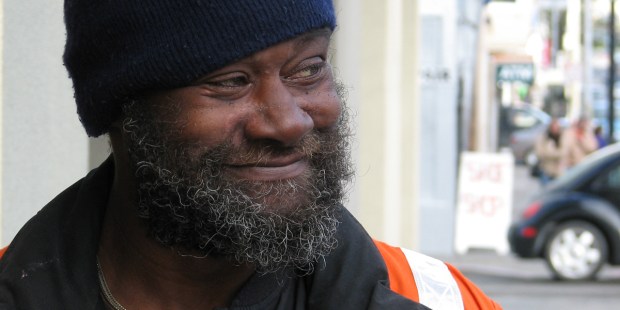 You don’t know Joe. Even if you did know him, you probably didn’t know the Joe I did.

It feels like all I have left from him is some Camel cigarette merchandise I won’t ever use, a craving for Arizona iced tea, and an ache in my inside.

I wish I had cared more about his stupid cat and baseball and all the other things he liked. Well, actually I did care about the cat. The last time we saw Joe was to take his cat to the vet with him. I was more worried about his cat dying than I was him. Joe’s death was definitely a surprise.

I wish I had thanked Joe one more time for spoiling me so much. He was supposed to be the one we were helping, not the other way around.

In my two years of service to the homeless with Christ in the City in Denver, Joe was one of my closest friends. Christ in the City is a missionary program for 20-something-year-olds to live in community, pray together, and serve the poor. Their main focus is on the homeless, and as a missionary I went out every day to the same area in Denver to talk to the homeless who were around. Sometimes our forays brought new encounters, sometimes we’d see old friends we’d gotten to know. As missionaries, we helped connect the homeless to local resources. But we also just gave them friendship. We’d sit down with people on the sidewalk and do crossword puzzles with them, take some of our new friends out for coffee, or just talk about life.

Joe was a special case. Instead of meeting him while he was homeless like most of my “friends on the street,” as we affectionately call them, we met Joe once he had gotten off the street and into a housing program. His caseworker heard about Christ in the City and reached out to us for some help in cleaning Joe’s apartment. He suffered from chronic obstructive pulmonary disease, and had low energy levels, so even cleaning the small space was a challenge for him.

This wasn’t the focus of our ministry, but when you’re a missionary, people ask you to do all kinds of weird stuff. It’s like we wear some sort of invisible name tag saying, “Hi, let me help you with whatever you need.” My favorite was when a lady asked three of my fellow missionaries to help her get her grandma out of the trunk of her car. (Don’t worry, the grandma wasn’t actually in the trunk.) So cleaning the apartment of a once-homeless guy was pretty normal.

We cleaned, took Joe grocery shopping and the like. After cleaning the house a few times, Joe started to ask us to come sit and hang out after. We quickly realized it wasn’t the cleaning he appreciated most. We would sit and chat while listening to Bob Seger, Led Zeppelin and Pink Floyd. Now that was something I could get excited about with him. My dad had taught me well, and Joe was impressed when I could say, “Is this Zeppelin’s Clementine?”

Slowly the facade of “cleaning” faded, and we just hung out. Our favorite pastime was playing spades, a card game usually mastered while in prison and a hit among the homeless.

Joe was always giving me a gift, whether it was gluten-free bread he found at the food bank, a sweatshirt Camel had sent him for being a loyal customer, or my most treasured present, a book on redheads’ quirks. Every week he offered us iced tea (raspberry or Arnold Palmer), a basket of Halloween candy from years past, and pints of Ben and Jerry’s ice cream — an amount of sugar just short of inducing a diabetic coma.

Joe called us his “kids,” and would tell everyone in the building, “the kids are coming over today!” While he knew best the three or four of us that came every week, he liked to take all 20 of the missionaries out for a special outing every year. One year it was an old-timey restaurant complete with a petting zoo outside. This past year it was a trip to the arcade with Joe slipping me more tokens than I knew what to do with. His generosity always surprised and challenged me.

Transitioning out of Christ in the City was hard and especially hard without Joe. It was like he passed at the end of an era. I was dropping off boxes of clothes and possessions at my new house, scared and afraid of what my life would be like now, so I decided to call Joe one last time. He was already dead, but I tried my luck to see if his phone was still connected. I heard his familiar greeting and said a few words of goodbye. Then I sobbed my eyes out in front of what would be my new home.

I miss Joe. I miss my Christ in the City friends and work. I wish Joe were here to walk with me through this difficult time of transition.

You don’t know Joe. Even if you did know him, you probably didn’t know the Joe I did. To some, he came off as particular and stubborn. He went through different home care workers quickly. I could immediately tell if they would last based on the Hormel chili test. If they followed Joe’s specific instructions on his grocery list, down to which can of Hormel chili to get, the one with or without beans, they were in. (I can’t remember now if he preferred the beans of not.) Yes, he could be grumpy and stubborn. Not everyone who knew him was his friend.

But Joe, with all his particularities and quirks, was my Joe. What wouldn’t I give to hear him snap at me right now about scraping the chairs against the floor?

The Little Prince, the French children’s novel, portrays well the joyful coincidence of friendship. The fox asks the little prince to “tame” him, or to make him his own, saying, “To me, you are still nothing more than a little boy who is just like a hundred thousand other little boys. And I have no need of you. And you, on your part, have no need of me … But if you tame me, then we shall need each other. To me, you will be unique in all the world. To you, I shall be unique in all the world.”

To others, Joe may have been a crotchety old man, but to me he was unique. He was my Joe, and I will never look at Hormel Chili, Arizona iced tea and Camel cigarettes the same way.

“One runs the risk of weeping a little if one allows himself to be tamed.”

Read more:
A letter to a dying man

Read more:
What the Homeless Need Most Is You