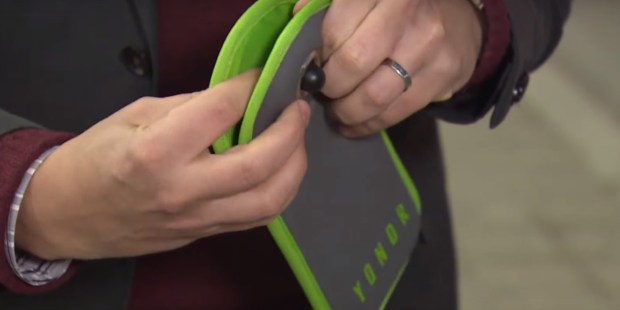 It’s being used in 600 schools and the results are “transformative.”

It seems you can’t fall over in public these days without your mishap being filmed and shared on various social networks, with an increase of people with smartphones in hand and eager fingers hovering over that record button. And Graham Dugoni, originally from Oregon, felt impelled to address this phenomenon after witnessing a carefree festival-goer being videoed by strangers and having his “funny” dance moves shared for millions of other strangers to watch. After questioning the level of privacy we should expect in a public arena, Dugoni concluded that it was time to “ditch the smartphones ” — those three words which would have many of us breaking out in a light sweat.

Yet Dugoni has a point; not only is it rude to video someone without their permission, but we’re all so busy gazing at our screens we’re not soaking in the atmosphere of what is going on around us. So the 31-year-old came up with a genius and simple device that is being used in over 600 schools, at concerts, and informal gatherings. Dugoni explains to The Washington Post that his device, called Yondr, is a sort of “prison” for cellphones.

At the entrance of a venue or school, users place their phone in a small neoprene pouch, which is then locked. They can then keep their phone on them and pop it in their bag or pocket. Although their phone is safely on their person they cannot use it until it is physically unlocked at a dedicated station — this doesn’t need to be fancy, it just requires a table and maybe a couple of chairs.

Out of temptation’s reach, people and students can get along with the job in hand: learning, watching a concert, or even talking to fellow guests. And the effects have been staggering. The principal of San Lorenzo High School in California, Allison Silvestri, reported to NBC that the Yondr has been “transformative.” Not only do students now talk to her in the school hallway, she has had 50 percent fewer knocks on her door for cases of classroom disruption. Students have noticed an improvement in grades, and one teacher felt her regular assignments were completed 10 to 15 minutes quicker. “Students are interacting, talking to each other, reading, kicking a ball, socializing — because they’re not standing in a circle texting each other,” Silvestri shared.

The pouch is proving popular in other public settings, too. At Dave Chappelle shows or Alicia Keys concerts, guests stow away their phones and concentrate on the event. There are no arms in the air recording the performance and disturbing those behind, and people can enjoy the show without the distraction of a phone, messages being received, or being sent. As Dugoni says: “What is the point of all those instantaneous texts, shares and likes?” As Yondr’s website states: “Be here now.”

With growing reports demonstrating the dangers of smartphone addiction, Dugoni might have found the perfect solution to this modern day issue. With improved behavior and performance at school, it would be great if this could extend to home life, too — there will be many a parent wondering if they can get their hands on these pouches for use at the dinner table. But that’s where parents need to set the example: how about we pop our cellphones in our purse and leave them there — well, at least until the kids are tucked away at night.