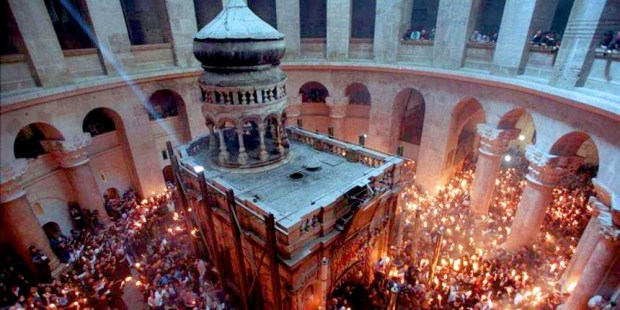 Greek workers and Israeli researchers may have discovered an ancient altar in Jerusalem’s Church of the Holy Sepulchre. And it has been “hiding in plain sight” for centuries.

“Leaning against a wall in a shadowy corner of Jerusalem’s [Church of the] Holy Sepulchre, the big blank rock the size of a dining-room table invited scribbling by passing pilgrims and tourists,” said Smithsonian magazine, noting that the piece was known to tourists as the “graffiti stone.”

The altar may have continued to go unnoticed were it know for work in recent years in shoring up the Edicule, also spelled Aedicule, the church-within-a-church protecting the site of Jesus Christ’s burial.

A Greek team of engineers and architects recently restored the Aedicule, which had long been in danger of collapse. In the course of the effort, the construction crew used a crane to lift a two-ton block, referred to as the “graffiti stone” after visitors’ penchant for leaving their mark on it, into a steel cradle, turning it around in the process but relegating it to another dark corner.

Amit Re’em of the Israeli Antiquities Authority, who was monitoring the renovation, noticed intricate circles carved into the limestone “with traces of marble and the rich red stone called porphyry. This was no tourist graffiti. Re’em, who specializes in medieval archaeology, dashed of to a Jerusalem library to look for evidence of other stones with similar decorations.

Along with historian Ilya Berkovich at Munich’s Ludwig Maximillian University, Re’em “tracked the geometric pattern on the stone’s design to a style popular in Rome in the 12th century,” the magazine reported. “The use of four circles surrounding a central circle, all richly inlaid, was the trademark design of the Cosmati family, Roman artisans who worked for the pope.”

The stone’s design “symbolized the power, both temporal and spiritual, that the Papacy achieved during the 12th century,” writes art historian and New York architect Paloma Pajares-Ayuela in the definitive book on the style. That suggested the stone was carved and inlaid when the Crusaders rebuilt the church.

“I think that this exquisite piece of art could be evidence for the papal artistic patronage in the church,” Re’em says. “It is proof that Crusader art was highly developed” and reflects the direct influence of Rome on the distant Jerusalem shrine. Papal craftsmen may have been directly involved in the work, he suggested.

Re’em believes the altar was used for Mass until a fire in the church in 1808. Then it was buried under a new floor. Greek archaeologists in 1969 began excavating in the nave and under the main altar east of the Edicule. Results of that work were never made public, but a Catholic priest realized that the Greek team found Crusader-era remains at that time. “Some were covered up, but others, including the rectangular panel examined by Re’em, were removed so that the researchers could access material from the earlier Byzantine era,” the magazine said.

If the stone does turn out to be something that was set up by the Crusaders, it will remind the various communities that call the church home of the sometimes sad history of division that has marked Christianity’s holiest site. The Crusaders were trying to reclaim lands that had been taken over by Muslim invaders, but they also regarded the local Greek clergy as heretics (the Great Schism had occurred only decades early), and ejected the Orthodox priests from the Church of the Holy Sepulchre. Smithsonian reminded readers that Greek Orthodox, Roman Catholics, Armenians, Copts, and Syrians “jealously guard their respective territories within the Holy Sepulchre,” in an 1853 decree issued under the then-Ottoman rulers, known as the Status Quo, “with Ethopians relegated to the roof.”

“Scuffles among clergy of the different sects is not uncommon, and occasional bloodshed is recorded,” the magazine noted. Ironically, perhaps, two Muslim families “hold the keys to the great Crusader doors to ensure everyone access.”

This year, however, now that the Edicule has been formally reopened, it is hoped that the restoration project, undertaken by Catholic, Greek Orthodox, Armenian Orthodox and others, may help the Churches go beyond the status quo of the past millennium.