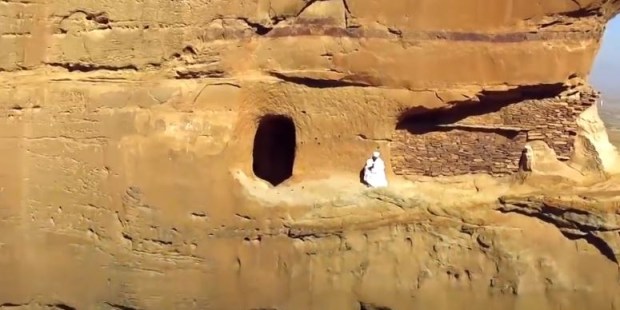 Faith moves mountains … in more than one way.

“Who may ascend the mountain of the Lord and stand in the holy place? The one with pure heart and innocent hands” (Psalm 24). One might dare to say that Haylesilassie Kahsay, an Ethiopian Coptic priest, is one of them.

In the mountains of Gheralta, in northern Ethiopia, Father Kahsay walks for two hours every day and then climbs a cliff to reach the Abuna Yemata Guh, a church carved into the side of the cliff, adorned with colorful frescoes and two full domes.

It is customary to make the ascent into the church barefoot and with no ropes. The local Christian tradition claims the “Nine Saints” (the original group of missionaries from the 5th century who fostered the growth of Christianity in what is now Ethiopia) protect those who climb these cliffs.

Father Haylesilassie Kahsay’s daily life is all about work and prayer. He gets up at dawn and works at his house until 6 o’clock in the morning. After eating, he starts his two-hour walk to get to the church.

That’s when the climbing begins. It includes a 10-meter fully vertical section. “I do not get afraid when I climb to the church because I climb every day. It is very difficult, but I find it manageable,” said Fr. Kahsay to the BBC.

Once he gets to the church, he spends his time in prayer and study. He devotes most of his time to the study of old books. “I am happy reading my book for the whole day. Because it is very quiet here, there really isn’t anyone to talk to. You communicate with God and share your secrets with him. And then your mind becomes free and happy.”

For centuries, the priests who came here to care for this church have also been buried in it. But none of them has ever died, tripped, or had an accident during the ascent. “The nine saints who live in these mountains have kept them safe,” smiles Father Kahsay.

This article originally appeared in the French edition of Aleteia and is translated and adapted here for an English-speaking audience.