Why are oxen perched on the cathedral of Laon?

Perched 56 meters high, 16 oxen adorn the two main towers of the cathedral of Laon (Aisne). But by what miracle did they end up there?

“Everything is beautiful in Laon; churches, houses, surroundings, everything,” Victor Hugo once wrote to his wife, Adele. A masterpiece of Gothic art, the cathedral of Laon, built at the end of the 12th century, has the largest sculpted ensemble of this period. Commissioned by Bishop Gaulthier of Mortagne, it is one of the oldest Gothic cathedrals, built before Notre-Dame de Paris. With its three large sculpted portals, its arched windows and spandrels decorated with characters, the building is undoubtedly one of the most beautiful Gothic cathedrals of France.

The five towers that rise up 75 meters in height are particularly impressive. Originally, two spires surmounted the south and south-west towers, built during the 12th century. One fell due to an earthquake in the 17th century; the other spire was later demolished during the Revolution. To reach the cathedral’s summit, you must climb the 210 steps of a relatively narrow spiral staircase. But the panorama is worth it. The visitor can then enjoy a breathtaking view of the Laonnais plateau. But as soon as one turns to the great towers, the visitor is struck by the presence of some strange beings. Indeed, on both towers, perched at 56 meters high, 16 life-size carved stone oxen seem to look over the city.

How did they get there?

Legend has it that, one day, a team carrying the stones needed for the construction of the cathedral from the lower side of town collapsed, completely exhausted. Suddenly, a white ox miraculously descended from the sky, replacing them and finishing the job. Even though the inhabitants of Laon like to tell this story, in reality, these oxen would have been made simply to pay tribute to the animals that helped bringing the materials to the construction site. Today, these oxen continue to pique the curiosity of visitors and allows the cathedral of Laon to distinguish itself, with originality, from its competitors.

If you want to look for the particularities of other churches in France, Aleteia invites you to climb to the summit of the highest ones in the country. Discover them in this slideshow: 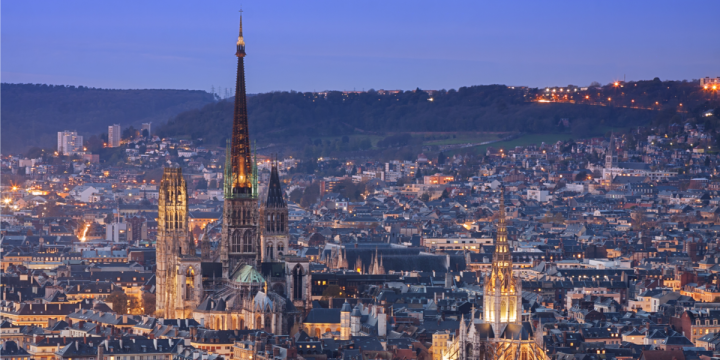