It was built in Venezuela on the spot where the Virgin was said to have appeared in 1570.

From 1892 to 1954, when Ellis Island served as the main port of entry into the United States, migrants coming from across the Atlantic were welcomed by a colossal neoclassical statue representing the one thing they were after: freedom.

“And then all of a sudden we heard a big commotion and we came to America,” one migrant recalled. “And everybody started yelling they see the Lady, the Statue of Liberty.”

“The Lady,” a 153-foot tall copper statue, was a gift from France to the United States in 1886. It was designed by French sculptor Frédéric Auguste Bartholdi and constructed by Gustave Eiffel, who a year later built his namesake tower in Paris.

For years, “Liberty Enlightening the World” (as Lady Liberty is formally known) stood as the tallest statue in all of the Americas. Then, in 1983, Spanish sculptor Manuel de la Fuente erected a 153-foot statue of the Virgin Mary, the “Virgen de la Paz” (Virgin of Peace), in the state of Trujillo, in western Venezuela.

The imposing statue, made entirely of concrete and weighting around 2,400,000 pounds, is a few inches taller than the Statue of Liberty (151 feet from the base to the torch) and several inches higher than the world-famous sculpture of Christ the Redeemer (124.672 feet) located at the summit of Mount Corcovado, Rio de Janeiro, Brazil. 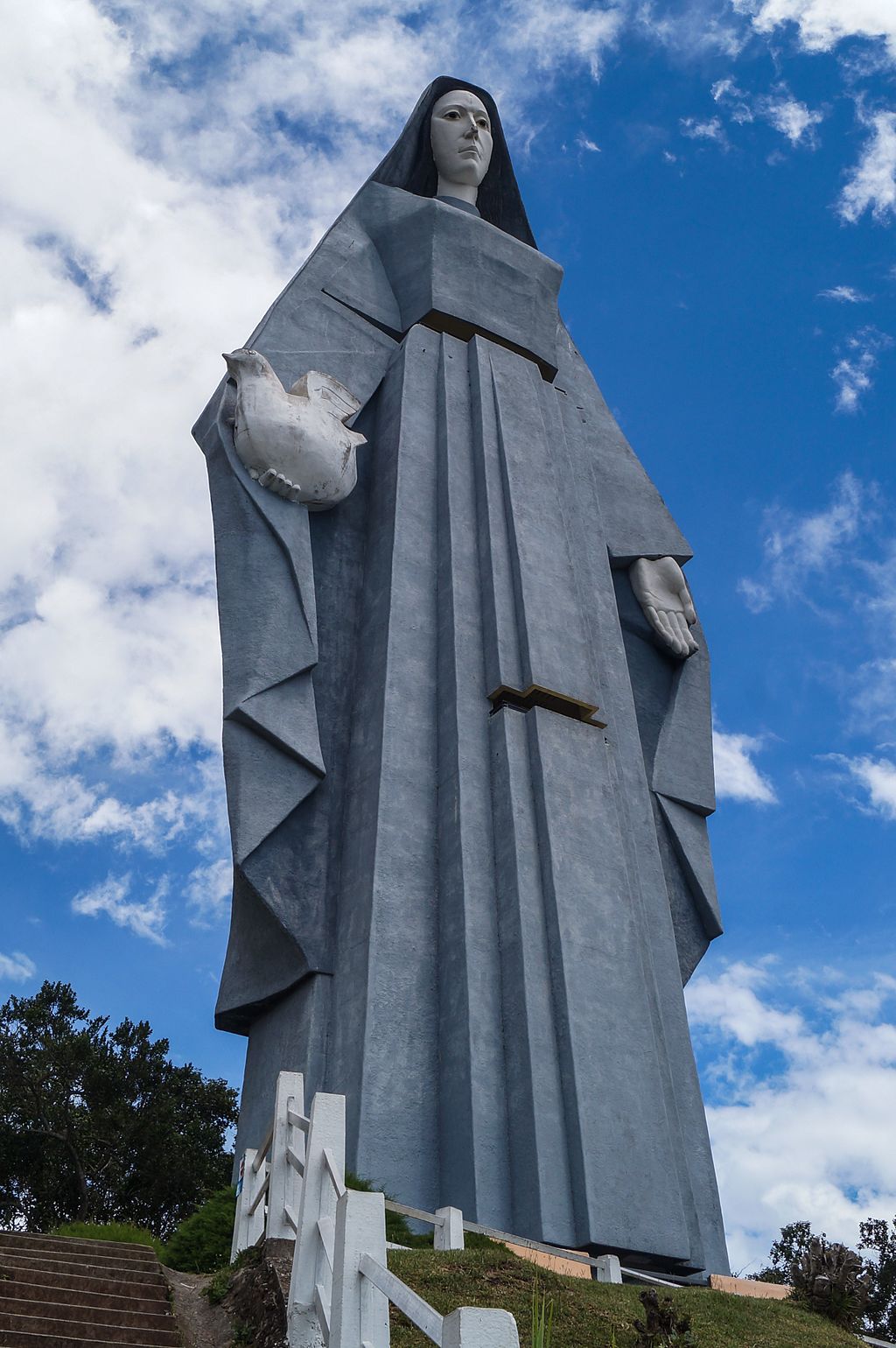 It was built by order of Venezuelan president Luis Herrera Campins on a 4,752-foot high plateau called “Peña de la Virgen” (Rock of the Virgin), where it is said the Virgin Mary appeared in 1570. According to the tale, a young woman was walking down the streets in the village of Carmona to buy candles. A group of men approached her asking: “Why are you walking alone?” to which she replied “I am not alone, I am with God, the sun and the stars” or, according to other versions, “Brothers, don’t forget I am walking with God, my protector.” The men then followed her as she went to hide behind some rocks, and realized her true identity.

Much like the Statue of Liberty, the Virgin of Peace can be visited from the inside with its five enclosed balconies offering a spectacular view of the surrounding tropical forest.

Both monuments are rich in symbolism. The Statue of Liberty represents Libertas, the Roman goddess of freedom, holding a torch above her head with her right hand and a table on her left inscribed with Roman numerals JULY IV MDCCLXXVI (July 4, 1776), which is the date of the U.S. Declaration of Independence. The “Virgen de la Paz” was inspired by the Virgin of Our Lady of Peace, which has been the spiritual patron of Trujillo since 1568 and of the local diocese since 1960. She holds a white dove in her right hand, which stands as a symbol of peace on earth.

The statue also holds another record, that of the tallest representation of Mary around the world. Despite its colossal size and its strong evocative symbolism, it does not attract as many visitors as other tourist locations in the country.