Pope Francis: How do you pray when someone asks you to pray for him? 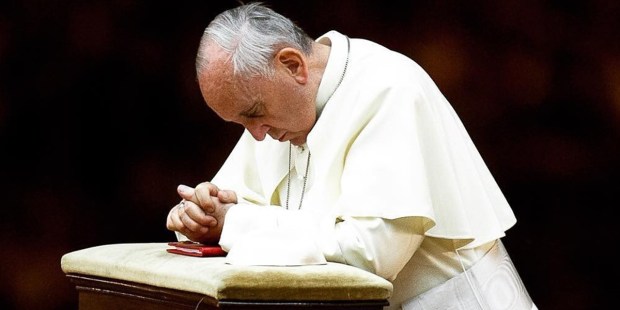 If you’re praying for someone, be ready to argue for what you want. This is intercessory prayer, says pope.

If you’ve agreed to pray for someone, don’t settle for a quick Our Father and Hail Mary, Pope Francis recommended today. Instead, be ready to “argue” for your petitions, he said, because, “When God sees a person who continually prays for something, He is moved.”

The pope made this reflection during his homily at Mass on Thursday morning in the Casa Santa Marta. He reflected on the power of prayer, starting with the dialogue between God and Moses.

“Courage and patience,” according to Pope Francis, are the two lynchpins of prayer, which must be raised up to God “in freedom, like children.”

The Holy Father took as his starting point the first reading from the Book of Exodus, which tells of the conversation between the Lord and Moses regarding the apostasy of God’s people.

Moses refuses to be deviated

The prophet tries to dissuade the Lord from acting on his “blazing wrath” against His people, who “had forsaken the glory of the living God to worship a golden calf.” In Moses’ bold dialogue, he reminds God of all He had done for his people, bringing them out of slavery in Egypt, and of the faithfulness of Abraham and Isaac.

In this “face-to-face” encounter, the pope said, Moses’ preoccupation and love for God’s people is evident. He is not afraid to tell the truth and does not enter into the “deviation game.”

“God appreciates this,” said Pope Francis. “When God sees a person who continually prays for something, He is moved.”

“No tangents. I am with the people, and I am with You. This is intercessory prayer: a prayer that argues and has the courage to speak directly to the face of the Lord, who is patient. Patience is needed in intercessory prayer. We cannot promise someone we will pray for them, pray only an Our Father and a Hail Mary, and then leave it at that. No. If you agree to pray for someone else, you must take this [other] path. And patience is needed.”

Read more:
An open letter to people who pester their friends with prayer intentions

Patience and constancy in prayer

In daily life, the Holy Father said, unfortunately there are many cases of managers ready to sacrifice an organization in order to save their own interests and to make a profit. But Moses refused to go off on a “tangent”; he is with the people and fights for them.

Scripture, Pope Francis said, is full of good examples of constancy and the capacity to be patient, such as the Canaanite woman and the blind Bartimaeus of Jericho.

“Two things are needed for intercessory prayer: courage, or parrhesia, and patience. If I want the Lord to listen to my requests, I must return, and return again, to knock at the door of God’s heart, since my own heart is committed to [this petition]! But if my heart is not concerned for this need, or the person for whom I am praying, neither will it be capable of courage and patience.”

To have a concerned heart

Finally, Pope Francis pointed out the “path of intercessory prayer.” He said it means being concerned for others and willing to fight, strive, and fast for them.

“May the Lord give us this grace: The grace to pray before God in freedom, like children; to pray with insistence; to pray with patience; but, above all, to pray in the knowledge that I am speaking with my Father, who will listen to me. May the Lord help us to advance in this form of intercessory prayer.”

Read more:
How science and Scripture explain why we need more heart in our prayer