Venezuelan children are starving to death at an increasing rate 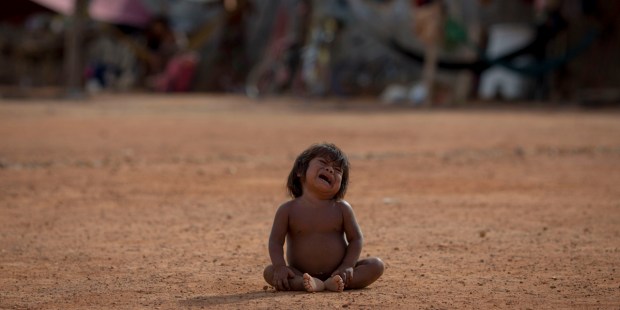 As Venezuela’s food crisis continues, now leading to more and more deaths among children, and the country’s president refuses outside humanitarian assistance, a Venezuelan priest is appealing for help from potential “godparents” around the world to save some 300,000 children.

That’s the number of children Fr. Manuel Geronimo Sifontes says are at risk of malnutrition. Even if they survive starvation, their health and growth will be severely impacted.

“There are six to eight children dying a week,” Fr. Sifontes said in an interview Thursday. “In my state of Monagas, in the first two and a half months of 2018 we have seen 34 children die of malnutrition. A family needs the equivalent of 22 salaries just to get a basic basket of food, to cover the basic nutrition for a month for children in their family. Sometimes that help doesn’t even get to the children because the aid must pass through various hands, and the food disappears.”

Similar things are happening to medicine, he and others reported.

Susana Raffalli, a Venezuelan nutritionist specializing in managing food security in humanitarian emergencies and disaster risk, said in a recent interview that the country is experiencing “severe food insecurity” because of the “demonstrated deterioration in the availability of food, the shortage.”

“Access is restricted by allocated shopping days; people have to place their fingerprints to purchase products; there has been a shift from the food distribution network to a public sector that works very poorly,” Rafalli said. “We must add a strong inflation that restricts access on the economic side; the purchasing power of the salary hardly covers the food basket.”

She suggested that even if the government let foreign aid in, there must be more basic systemic changes to improve the situation.

“Here is a state that is supposed to manage its food balance. This is not a population displaced or geographically isolated by a natural event or war. Humanitarian aid is not to replace a State that is unable to guarantee the food supply to its nation,” she stated. “In the countries where humanitarian aid includes food distribution, it is in those geographically isolated by an acute emergency such as an earthquake or stateless countries such as Darfur or Gaza. In the Cáritas container that arrived at the Port of La Guaira, for example, there were no flours, butter or oil, but nutritional supplements high in protein, folic acid for pregnant women, lipid base for malnourished children.”

UNICEF in January reported that a growing number of children in Venezuela are suffering from malnutrition as a consequence of the protracted economic crisis affecting the country.

“While precise figures are unavailable because of very limited official health or nutrition data, there are clear signs that the crisis is limiting children’s access to quality health services, medicines and food,” the UN agency stated.

“Hunger has stalked Venezuela for years. Now, it is killing the nation’s children at an alarming rate, doctors in the country’s public hospitals say,” the New York Times reported in January:

Venezuela has been shuddering since its economy began to collapse in 2014. Riots and protests over the lack of affordable food, excruciating long lines for basic provisions, soldiers posted outside bakeries and angry crowds ransacking grocery stores have rattled cities, providing a telling, public display of the depths of the crisis.

But deaths from malnutrition have remained a closely guarded secret by the Venezuelan government. In a five-month investigation by The New York Times, doctors at 21 public hospitals in 17 states across the country said that their emergency rooms were being overwhelmed by children with severe malnutrition — a condition they had rarely encountered before the economic crisis began.

“Children are arriving with very precarious conditions of malnutrition,” said Dr. Huníades Urbina Medina, the president of the Venezuelan Society of Childcare and Pediatrics. He added that doctors were even seeing the kind of extreme malnutrition often found in refugee camps — cases that were highly unusual in oil-rich Venezuela before its economy fell to pieces.

The crisis has gotten so bad that women of child-bearing age are having themselves sterilized to avoid having children they can’t feed.

In spite of an effort on the part of the government to enforce a blackout of health statistics, some figures have leaked out, the Times reported. “In the Ministry of Health’s 2015 annual report, the mortality rate for children under 4 weeks old had increased a hundredfold, from 0.02 percent in 2012 to just over 2 percent. Maternal mortality had increased nearly fivefold in the same period.”

For almost two years, the government did not publish a single epidemiological bulletin tracking statistics like infant mortality. Then in April of [2017], a link suddenly appeared on the Health Ministry’s official website, leading to the unpublished bulletins. They showed that 11,446 children under the age of 1 had died in 2016 — a 30 percent increase in one year — as the economic crisis accelerated.

Doctors interviewed by the Times at nine of the 21 public hospitals said that they had kept at least some count. “They encountered nearly 2,800 cases of child malnutrition in the last year alone, with starving children regularly brought to emergency rooms,” the newspaper said. “Nearly 400 of the children died, the doctors said.”

Fr. Victor Salomon, a priest in Caracas, agreed that the situation is “getting desperate.”

“Yesterday I asked the children in catechesis, ‘How many of you have a family member who has left Venezuela because of the crisis?'” he said in an interview last week. “Every hand went up. And we’re talking 300 kids. It’s like a war now. The people who had the opportunity to escape are escaping.”

With 80 percent of children suffering from malnutrition, Fr. Salomon said, “we now have a whole generation that will not develop their skills.

Virgilio Reyes, a native of Venezuela, said that the government issues food assistance packages, but in order to get them “you have to pledge allegiance to the government.”

“So they issue an ID, and you are registered with the PSUV (the Venezuelan United Socialist Party),” said Reyes, who added that families often have one member sign up so that the assistance might benefit all family members. “That doesn’t mean the whole family pledges allegiance to the Party,” he said. “The problem is you don’t get the food on a regular basis; it comes every two or three months.”

Fr. Sifontes said that Caritas Venezuela is trying to help, and the Church has tried to funnel donations to families who are especially hard-hit. But that in-country help has dried up as hyperinflation has wreaked havoc in most parts. Those who were poor 10 years ago are now in extreme poverty, and those who weren’t poor ten years ago now are.

He and collaborators are starting a program called Programa Viveros, which plans to take children who are starving to a place where they can recuperate.

“We are trying to establish these all over the country, so we are looking for international help,” he said. “We’re looking for godparents to support children.”