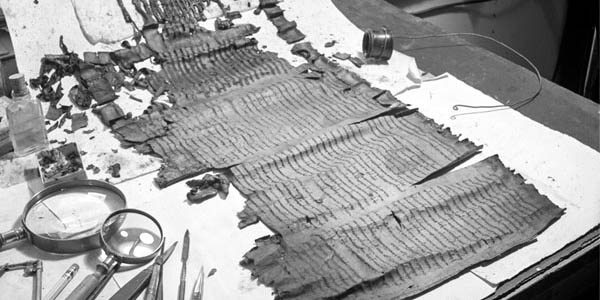 The fragment of the ancient Jewish text is from the Genesis Apocryphon.

Seventy years after its discovery in the Judean Desert, a fragment of the Dead Sea Scrolls is going on display for the first time at Jerusalem’s Israel Museum.

The Genesis Apocryphon was the first of seven Dead Sea Scrolls making up a collection of Jewish texts dating back to the 1st century B.C. that were found in caves on the West Bank in the 1940s and 1950s. It is the only existing copy of an ancient text that elaborates on the stories of the first book of the Bible.

Dead Sea Scroll makes rare show in #Jerusalem (from @AP) “The #Genesis Apocryphon describes the lives of #Noah, #Abraham, #Enoch and Lamech, characters in the book of #Genesis, and are written in the first person.” #awesome #deadseascrolls https://t.co/ypbApOwBKX

“This is the only copy of this book on Earth,” said Adolfo Roitman, curator of the Israel Museum’s Shrine of the Book, according to an AP report.

The parchment tells the story of Noah’s Ark “alighting on the peaks of Mount Ararat after the fabled flood. Noah tells how he ‘atoned for all the earth in its entirety’ by offering up various animal sacrifices,” reported AP.

The text’s Aramaic verses are unusual in that they are written in the first person. They also describe the lives of Abraham, Enoch, and Lamech, characters from Genesis.

“In some way what we have are parallel stories that we don’t have in the Hebrew Bible, in which the patriarchs are presented in different ways than the ways we have today in the Pentateuch,” Roitman said.

Visitors to the museum can study the delicate parchment by pressing a button that illuminates it for 30 seconds in order to protect it from direct light.

A look at the Dead Sea Scroll Genesis Apocryphon that is now on display at the @israelmuseum.
A fascinating 2,000-year-old Jewish text with some surprising features!https://t.co/kVqDfTuOFf pic.twitter.com/dZAhATDMoD

Because it is so fragile, only one section of the Genesis Apocryphon has ever gone on display.

“It’s the first time the general public is seeing it,” said Israel Museum director Ido Bruno. “We have a window of opportunity today to see it for a few months and then it will go back to the cellars and will not see the light of day again for dozens of years.”