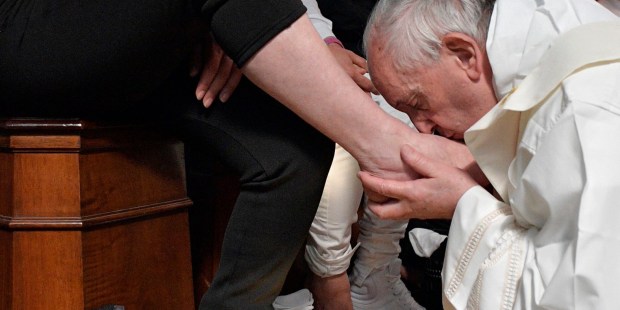 Osservatore Romano | AFP
Pope Francis kisses the foot of a prisoner at the Mass of the Lord's Supper, with the washing of the feet.
Share
Print
Ary Waldir Ramos Diaz - published on 03/29/18

“I am a sinner like you, but today I represent Jesus; I am the ambassador of Jesus.”

“He who rules, must serve,” said Pope Francis, who washed the feet of 12 prisoners in Rome today in memory of Jesus’ gesture during the Last Supper.  If leaders and rulers thought about serving, perhaps many wars and conflicts would have been avoided, he suggested.

He invited his listeners with even more insistence to serve difficult, odious, and malicious people. And once again, he condemned the death penalty, saying any penalty should lead to hope.

“Jesus risked himself for each one of us. His name is Jesus, not Pontius Pilate: He isn’t capable of washing his hands, He only knows about risk,” said Francis in his homily, delivered with no papers in his hands, during the Mass of the Lord’s Supper at the Roman prison Regina Coeli, this Holy Thursday, March 29, 2018.

“You are important to me. Jesus has come to serve us, and the sign that Jesus is serving us here today, at Regina Coeli prison, is that He has chosen 12 of you, like the twelve apostles, so as to wash your feet,” said the pope at the most emotive moment during the rite.

The pope, who washed the feet of 12 prisoners to represent the gesture Jesus performed for His disciples during the Last Supper, said, “Jesus knelt among thorns, risking getting hurt, to save the lost sheep.”

The men who participated in the rite are from seven different countries: there were four Italians, two Filipinos, two Moroccans, one Moldavian, one Colombian, one Nigerian, and one Sierra Leonean. Of the group, two prisoners are Muslims, one is Orthodox, one is a Buddhist, and eight are Catholics, the Vatican reported.

Read more:
Where Pope Francis finds himself every Holy Thursday

The pope presented himself to the prisoners in the Roman prison as a sinner loved by God. “I am a sinner like you, but today I represent Jesus; I am the ambassador of Jesus.”

Before washing their feet, he explained, “Today, when I kneel before each of you, think […] I am a slave, a servant, like Jesus.”

He invited them to reflect: “Jesus has taken a risk on this man (the pope), a sinner, to come to me and tell me He loves me. This is service, this is Jesus. He never abandons us, He never tires of forgiving us, He loves us so much.”

The bishop dressed in white described a Jesus who takes risks. “Look at how Jesus takes risks,” he repeated.

A person in a position of power must serve, Francis explained; “With these feelings, we go forward with ceremony, which is symbolic: before giving us His body, His blood, Jesus risks himself for each one of us, and He risks Himself in service, because He loves us so much.”

“Service: in truth, there are people who don’t make this attitude easy—proud people, odious people, people who might wish us ill; but we are called to serve them more. And there are also people who suffer, who are cast aside by society, at least for a time, and Jesus goes there to tell them: You are important for me.”

Then, he carried out the rite of the washing of the feet, with which the Holy Triduum rites continued; tomorrow, the Holy father will preside at the solemn liturgical Celebration of the Lord’s Passion, and at night, he will officiate at the Way of the Cross in the Colosseum in Rome.

The pontiff arrived at the prison at 4PM Rome time, and after going through security, he went to the infirmary, where he greeted the sick prisoners.