My kids think they don’t have to go to church because their dad doesn’t. What can I do? 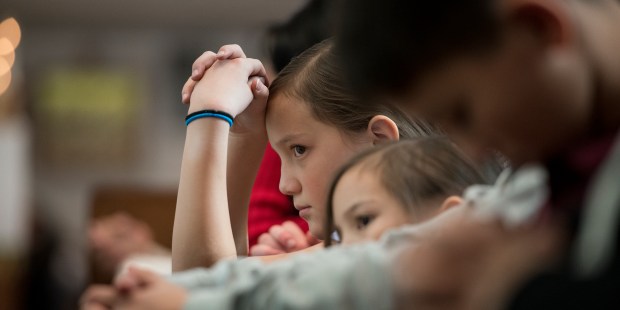 A question that illustrates how influential the role of fatherhood is in the spiritual upbringing of children.

Q. What advice can you give a mom whose kids think they don’t have to go to church because their dad doesn’t? My husband just isn’t a very religious. I knew that about him going into our marriage, and to be honest, I wasn’t very religious myself when we got married. Once we had kids, though, it became important to me to raise them Catholic. So we decided that I would  handle everything that had to do with religion. It worked for us in those early years but now our kids, 9 and 13, don’t want to go Mass anymore and think it’s not fair that I make them go when my husband gets to stay home. What can I do?

“If the father is non-practicing and mother regular, only 2 percent of children will become regular worshipers, and 37 percent will attend irregularly. Over 60 percent of their children will be lost completely to the church.” [Source]

It’s also interesting to note that during the rite of Baptism the priest or deacon addresses the parents in these words:

“You have asked to have your child baptized. In doing so you are accepting the responsibility of training him (her) in the practice of the faith. It will be your duty to bring him (her) up to keep God’s commandments as Christ taught us, by loving God and our neighbor. Do you clearly understand what you are undertaking?”

I bring this up to point out that your husband’s unwillingness to attend Mass doesn’t just affect him. While he may not be directly preventing you from taking the kids to church,  if he isn’t actively reinforcing and supporting your beliefs he essentially undermines all your hard work. He is not fulfilling his promise to “accept the responsibility of training his children in the practice of faith.”  In choosing to not lead by example you’re left bearing the brunt of the aftermath.

Your children have placed no value on regular Mass attendance because their father has not. It’s quite possible he simply isn’t aware of how much impact his inaction on the matter has or how much of a contradiction he is creating. One parent says going to church is important and the other, though his actions, says Mass attendance is inconsequential.

Too often one parent thinks that as long as they aren’t directly interfering with the efforts of the other then everything is fine. But can you imagine if we applied this type of thinking to other areas of parenting? It doesn’t work. Both parents must work together as a team.

Have you told him how difficult the kids are being and that they are using him as a scapegoat to get out of going to church each week? Perhaps if he knew they were using him as a catalyst to manipulate the situation he would be willing to step in.

I know you can’t force your husband to go to church, and demanding he do so might put a serious strain on the marriage, but perhaps a compromise can be reached like Mass with the family every other week or let him help get the children up, dressed, and fed for church in the morning instead of you. At the very least, you should be able to expect his support and be able to count on his authoritative reinforcement when they start giving you excuses and arguments. For him to relinquish his parental responsibilities in this matter simply because he chooses not to practice his faith is totally unacceptable and you are well within your rights to point this out to him. In hindsight, the arrangement you made when the kids were younger is no longer working. It’s not unreasonable at all to suggest the arrangement have some new terms.

Hopefully, with the support of your husband, the pushback your receiving from the kids will lessen. It’s important not to give up on them or give in. If you have to cart morose and moping teens to Mass every week, so be it. At least they are going. And if they don’t think going to Mass is important, perhaps they need more formation. Enlist the aid of your priest or the youth formation leader.